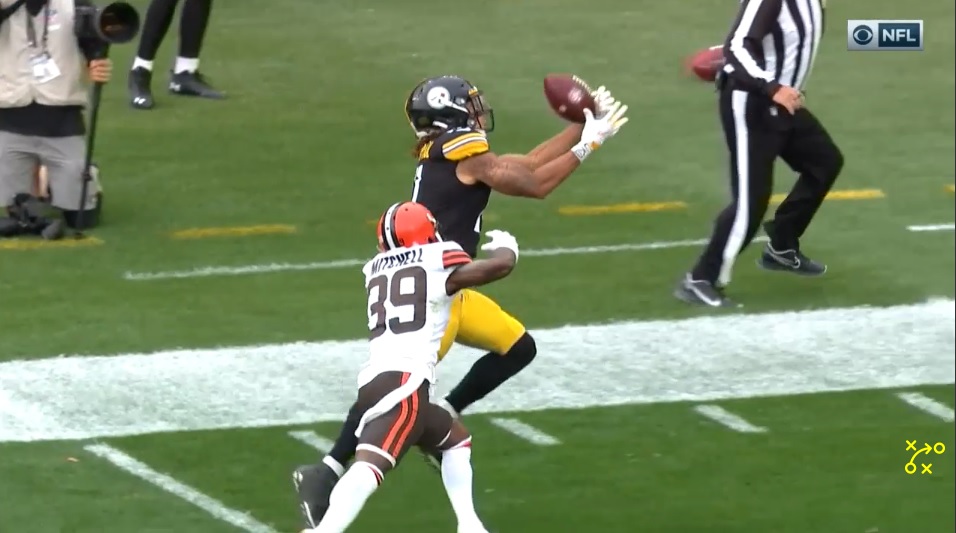 His athleticism has been really impressive. With each week we get to see Claypool contribute a little bit more and how quickly he can make an impact.  He wasn’t used in the offense for the first 19 minutes of the game and then he catches an out and up from the tight bunch formation.  When Ben Roethlisberger released the ball, Claypool hadn’t even passed the DB yet. He had a three other short catches with his final reception turning into a 23 yard gain by using quick change of direction and acceleration to create 17 yards after the catch.

He had a couple more carries with one resulting in another touchdown.  The other could have been a better gain if he showed a little patience and set up his blocker. He was credited with assist on a special teams tackle but it should’ve gone to another player.

Here is the other run from Claypool (11) and if he slows just a tad he gives Alejandro Villanueva (78) time to execute his block and he can cut inside and gains some more yards.

Break out game for Highsmith with him making contributions on defense and special teams. He contributed some bit hits on special teams getting credited with 3 tackles.  Like Claypool he was credited with the tackle on the first kickoff but I think it was actually someone else.  He followed that up with a punishing hit on a short punt late in the first quarter. He added another tackle on kickoff coverage late in the third quarter stopping the returner in his tracks. Nice to see him making plays on special teams. He did have a blemish being called for illegal formation on Steelers punt.

His defensive snaps were limited tying his lowest game total of the season but he had two very good reps. On a pass rush rep he made a nice move to the inside with his eyes on a sack and it looked like he got pulled down by the tackle. Later in the game he showed good pursuit on a Zone run away from him and pushed through to make the tackle (which he was not credited for).  I’d like to see him improve on not allowing the offensive lineman to get their hands into his chest. I think this was his best performance so far and a good sign for the rest of the way.

Here is the pass rep by Highsmith (56) in which he shows speed up the outside and the cuts inside with and arm over and it looks like the tackle pulls him down by the arm.  So (A) he may have missed out on his first sack and (B) if he gets the sack Bush might still be playing as this was the play he was injured on.

Here it the run rep from Highsmith. He’s on the right side of the screen and accelerates from the backside and tackles the right guard and the ball carrier.  Ola Adeniyi got credit for this tackle.

McFarland saw most of his action late in the game getting only 3 snaps before the fourth quarter. He ran a flat route out of the slot early in game and caught a screen late in the game.  He showed patience and the ability to get skinny slipping through a small hole on his first carry.  He had another solid gain called back on a holding call. His other carries had poor blocking and he didn’t have much of chance to make a play.

He did make a mistake that may have got him in a little hot water not knowing the play which looked like a draw that ended up forcing Ben to scamper for a few yards. Brighter days are ahead for McFarland.

Dotson continues to impress and is starting to get noticed more by others who aren’t Steelers fans. This was another good performance for him and even though Cleveland used a lot of pre snap shifts he didn’t seem confused or out of place. He impressed again with his footwork and hand placement.  He performed well on double team blocks and combo blocks climbing to the second level. His anchor looked better holding his ground in the pocket.  He may have gotten stepped on in the second quarter. I saw him limping a bit for a few plays but never wavered.

There were a couple of plays were he was beat. On one he expected the defender to stay outside and he overreached with his left hand and the defender swam over him to the inside.  The other can be seen below with him pulling to his left and whiffing on the defender that made the tackle. Overall, again he was impressive and he handles everything that comes his way.

Here he is pulling to his left and tries to put a shoulder into the linebacker who ducks around him and makes the tackle.  I love Dotson’s (69) reaction after the play knowing he made an error mad at himself for it.

I have said it just about every week but it’s true; he gets a little bit better each week.  On the first punt he was held and still helped chase the returner out of bounds. On a kick return by the Browns that got to the outside he played it very well, playing under control and making the open field tackle.  He was on kick return this week which I don’t think he has been doing in earlier games and had a solid double team block with Jaylen Samuels. On the Browns first punt he put on a clinic of how to harass and block a gunner. You couldn’t do it much better.

Another good undrafted free agent find by the Steelers and to his credit he’s worked to make himself better.  He’s got me curious about what he can do on defense.

Here is the kickoff tackle. Pierre (42) does a nice job staying balance and inside the returner and making the open field tackle.