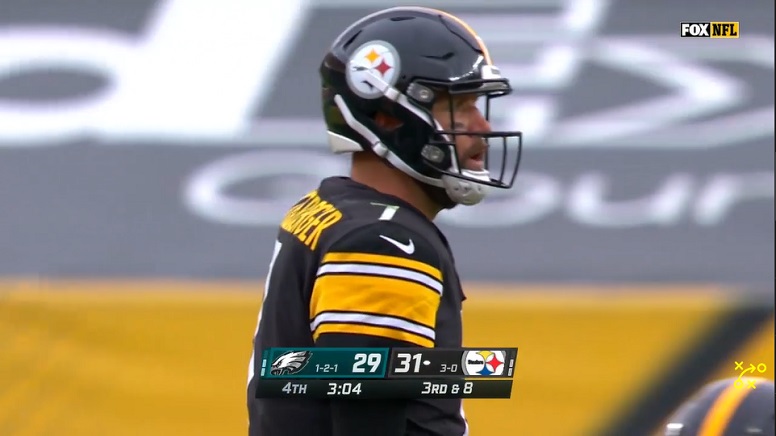 The Pittsburgh Steelers had a lot of great offensive players in their Sunday home win over the Philadelphia Eagles but the best one was probably the late 35-yard touchdown pass from Ben Roethlisberger to rookie wide receiver Chase Claypool on a 3rd and 8 with 3:04 left in regulation time. On that play, Roethlisberger had great pre-snap recognition of what the eagles were doing defensively, and it resulted in him changing route combinations on both sides to allow him to go for the proverbial throat. He talked about that play after the game,

“Actually, that’s a new formation we put in this week with Ray-Ray [McCloud] in the game, taking the back out,” Roethlisberger said. “And we went it a couple of times today. And so, we expected them on that particular play to kind of go with an all-out blitz, so we had a play called to get the ball out quick and hopefully try and beat the blitz. And they sat back in a cover -2 zone and just wasn’t what we expected.

“So, I saw that, and I changed the play. And I think the coolest part about the whole thing is we’ve never run the play I called with that formation or that group on the field. So, Chase has never been in that spot. Ray-Ray’s never been in that spot. The other three kind of know what they’re supposed to do. But we changed the play, and I can’t say enough about Chase getting down the middle of the field and kind of making that play for us.”

On the play, Claypool was lined up in the inside slot on the three-receiver side and the Eagles were showing a split safety look, cover-6, specially. They had run that defense earlier in the game against a similar look from the Steelers. The Eagles defensive alignment play call and personnel used resulted in Claypool essentially be matched up one-on-one with linebacker Nate Gerry, a huge mismatch. Roethlisberger saw this pre-snap and audibled changes to both sides. The double smash divider concept was run, and Claypool easily beat Gerry and split the two occupied deep safeties for the 35-yard touchdown.

On Monday, Eagles head coach Doug Pederson was asked about that touchdown yielding play and specifically if he thought he should have called a timeout to get the defense out of such a huge mismatch of Claypool versus Gerry. Pederson was straight and to the point with his response.

“You call a timeout, and you burn a timeout in a situation where you’re trying to stop the offense on a third and seven, third and eight situation,” Pederson said. “Listen, we as coaches have to put our players in situations to be successful, and that falls on me as the head coach and I’ve got to make sure that I do that. I didn’t want to burn a time-out in that situation because I knew that we were going to have to get the ball back, and we could have used those timeouts there.

So, listen, it’s, again, it’s all about them making a play and recognizing the defense and making a play. I mean, we sit here today and go, okay, yeah, call a different defense. Okay, yeah, do this, do that, and it’s — it is what it is – they made a play.”

Pederson was questioned a little deeper about that particular play as he was asked to comment on the execution of it by Gerry and safety Rodney McLeod. Pederson essentially praised Roethlisberger for having great recognition pre-snap and getting the Steelers offense in a play that would best attack the Eagles defense.

“Well, ultimately it was a touchdown, so obviously we can coach the defense and coach the play a little bit better,” Pederson said. “The awareness of where we were on the field, the down, the distance, all that kind of stuff we teach during the week. I mean, listen, it’s about awareness, down and distance. Could Nate [Gerry] have maybe backed up a touch and tried to keep the play in front of him? Sure.

“The way the coverage was designed, though, from — listen, it was five wides. It was empty. The safeties had to be wide. Again, it’s great execution by the Steelers. I mean, I don’t know what else to tell you guys. They recognized the defense, attacked and got the touchdown.”

Roethlisberger did indeed do a great job on this play from the moment the offense broke the huddle. Below are a few videos that have been circulating all day on Twitter that show not only scheme and execution, but the job Roethlisberger did to get the offense in the right play against the Eagles defensive alignment. Watch these videos, you’ll surely learn a thing or two.

My take on the game-sealing TD just based off film study:

– Here, they faced Empty ON 3rd-and-long. Had to choose coverage. Big Ben makes the play pic.twitter.com/02HFE9XUOB