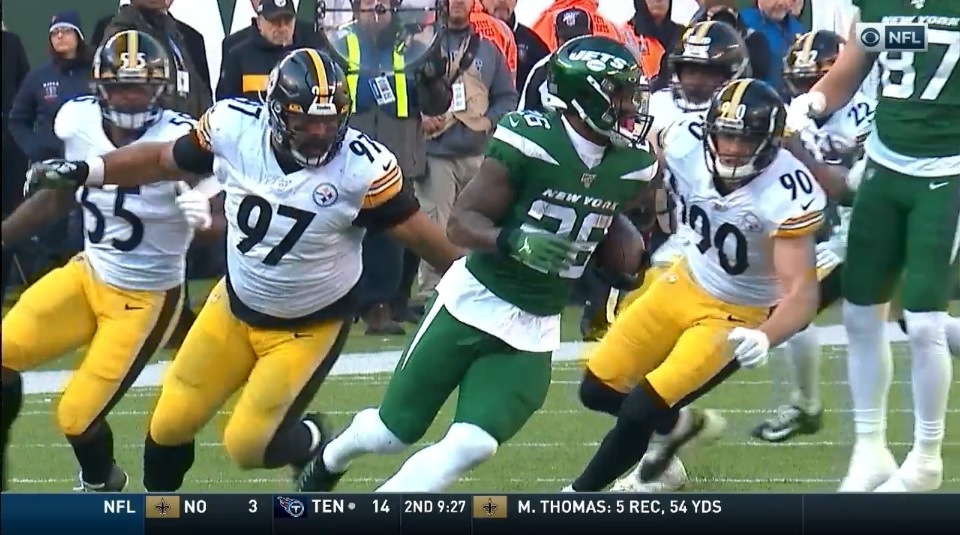 It certainly sounds like the running back Le’Veon Bell won’t be with the New York Jets much longer.

On Tuesday, Manish Mehta of the New York Daily News reported that the Jets are looking to trade Bell by this year’s trading deadline, which is October 29, 2020. Bell, who returned this past Sunday from a hamstring injury that had him sidelined for three games, seems to be frustrated with how the Jets are using him on offense.

“I know he’s frustrated that we haven’t won,” Jets head coach Adam Gase said on Monday. “It wasn’t necessarily the plan of not targeting him in the past game, it just kind of ended up being that way with how they were they were playing us. So that’s what it is, I mean, just try to find ways to move the football that’s all we’re trying to do, and it doesn’t always go exactly as planned.”

In the 17 games that Bell has played for the Jets, he has gained 863 yards and scored 3 touchdowns on 264 total carries. The former second round draft pick of the Pittsburgh Steelers has also caught 69 passed for 500 yards and another touchdown since joining the Jets.

Bell joined the Jets in 2019 as an unrestricted free agent after sitting out the 2018 season as a member of the Steelers after refusing to sign the franchise tag and turning down another long-term contract offer. He signed a four-year, $52.5 million contract with the Jets and that deal includes a fully guaranteed base salary in 2020 of $8.5 million. Bell reportedly has already received a $4.5million roster bonus from the Jets this year and is scheduled to earn $31,250 per game for every one that has him on the 46-man active roster for.

Assuming all contract details are correct, Bell is still due $6 million in base salary the remainder of the 2020 season. He still can possibly earn another $375,000 in per game roster bonuses as well.

If you are hoping for a Bell-Steelers reunion based on the Tuesday news, you probably shouldn’t be. The Steelers currently have a little less than $9.5 million in available salary cap space for starters. Additionally, Bell’s departure from the Steelers wasn’t very pretty. Bell is also due another $11.5 million in 2021, an amount that the Steelers certainly can’t afford. On top of all that, the Steelers probably aren’t willing to give up much for Bell in the way of draft pick compensation.

While it’s very plausible to think that Bell will be traded very soon, it’s hard to imagine the Steelers being a landing spot for him. Perhaps the New England Patriots might have some interest in Bell.