The Baltimore Ravens have now released what will likely be their final injury report of Week 8 ahead of their Sunday hone game against the Pittsburgh Steelers and the Friday offering shows that one key offensive player is doubtful for that contest with two other defensive players entering the weekend as questionable.

Not practicing again on Friday for the Ravens and ending the week listed is doubtful is running back Mark Ingram (ankle). Media members who cover the Ravens don’t expect Ingram to play on Sunday against the Steelers. Ingram failed to practice all week.

Limited in practice for the Ravens on Friday were cornerback Jimmy Smith (achilles) and safety Anthony Levine (abdomen) and both enter the weekend listed as questionable for Sunday’s game against the Steelers on the team’s injury report. Smith did not practice on Thursday while Levin was previously listed as being limited.

Sitting out practice on Friday for the Ravens were defensive end Derek Wolfe (concussion, neck) and defensive end Pernell McPhee (not injury related) but neither received game status designations on the team’s injury report to close out the week.

Practicing fully for the Ravens on Friday were cornerback Marlon Humphrey (illness) and guard Tyre Phillips (hand) and neither received game status designations to close out the week. That means like Wolfe and McPhee, both are expected to play on Sunday against the Steelers at M&T Bank Stadium. 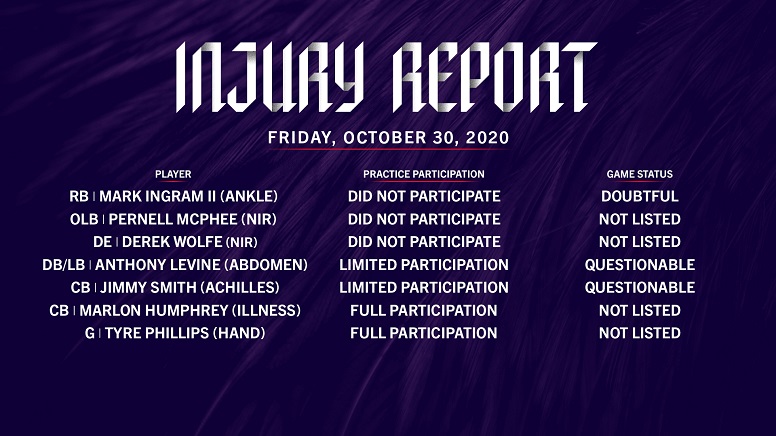