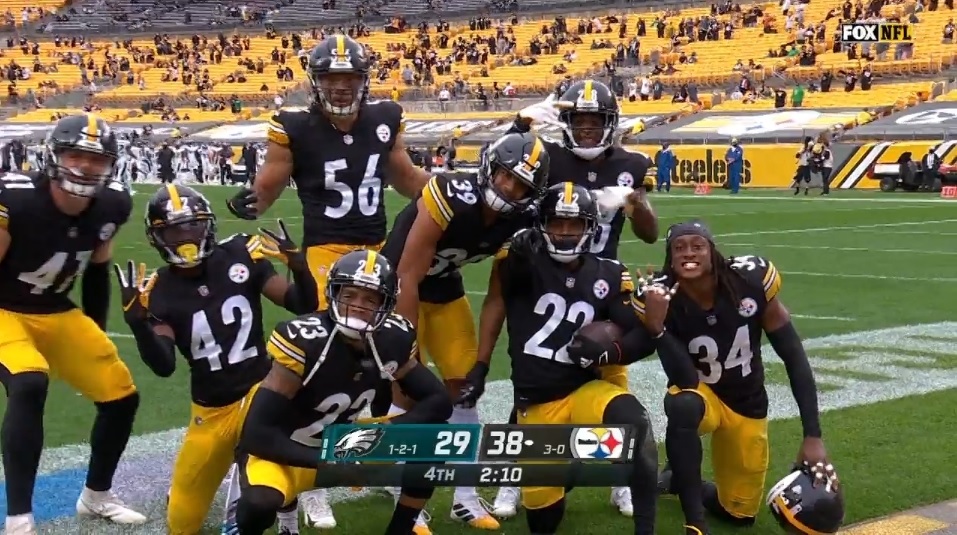 It certainly wasn’t pretty and caused quite a bit of stress throughout Steeler Nation, but in the end the Steelers made just enough plays on Sunday at Heinz Field to beat the Philadelphia Eagles 38-29, improving to 4-0 for the first time since 1979.

In the win, rookie Chase Claypool took a star turn, scoring four (count them, four!) touchdowns on Sunday, single-handedly carrying the Steelers to a key win at home. The defense was mostly a mess, allowing the short-handed Eagles to drive up and down the field on them, but in the end the defense did just enough to hold on for a win.

Let’s get to some grades ahead of this Victory Monday!

There were very few deep shots and very few “wow” throws, but Ben Roethlisberger adjusted after the first drive and started getting the ball out quickly to his playmakers, taking some pressure off of the offensive line against an elite defensive line.

Roethlisberger was quick with his decision-making, accurate throughout the day and made great throws when it counted, including the game-sealing throw to Claypool up the seam.

It’s good to have 7 back under center.

The numbers aren’t great for James Conner, Benny Snell and Anthony McFarland, but the running backs got the job done when it counted.

Conner ran hard all game long and really fought for his yards. Yes, his 25-yard run in the first half was more than half of his game’s total, but the Steelers’ OL didn’t get much push up front, so yards were hard to come by.

Same for Snell. He had just 19 yards on seven carries, but he helped drain the clock late with his hard running.

Everyone knew going into Sunday’s game it was going to be hard to put together much of a run game against the Eagles’ front seven, and that’s exactly what happened.

Chase Claypool sure picked a great time for his coming-out party.

It’s stunning to see a rookie have such an impact like this, but here we are.

With Claypool drawing all of the attention, it was a relatively quiet day for James Washington and JuJu Smith-Schuster (Diontae Johnson left early again with an injury), as the pair combined for just seven catches for 53 yards. A lot of those catches went for first downs though.

Boy, are we all glad Ray-Ray McCloud was chosen over Ryan Switzer for the 53-man roster. McCloud ripped off a 58-yard end-around that really sparked the Steelers’ offense. McCloud was also targeted three times, hauling in all three for 12 yards.

Aside from his fumble I thought Eric Ebron was solid as a receiving option Sunday. He was a security blanket over the middle of the field for Roethlisberger, who got rid of the ball quickly all game long.

In the run game, I was really pleased with Vance McDonald, who sprung a clean block on McCloud’s 58-yard run and also helped Conner rip off a few key runs on Sunday.

Let’s hope David DeCastro and Maurkice Pouncey – both of whom left the game with injuries – are okay.

That said, I thought Kevin Dotson, aside from his holding call and weird ineligible downfield penalties, was really solid on Sunday, more than holding his own against Fletcher Cox, Javon Hargrave and Malik Jackson.

Chukwuma Okorafor recorded the Steelers’ first holding penalty of the season, but overall he was solid as well. I loved seeing him downfield throwing blocks for McCloud on his long run.

I am a little concerned with the left side of the line at this point. Alejandro Villanueva and Matt Feiler gave up a lot of pressure in one-on-one matchups.

All that said, the offensive line gave up just one sack and two quarterback hits. The grade is lowered due to the lack of push up front in the run game.

They were quiet for much of the game, but when it counted Stephon Tuitt and Cam Heyward turned up the heat on Carson Wentz, recording second half sacks to help seal the win. Tuitt finished with a sack and a half, while Heyward recorded a sack.

Tyson Alualu pitched in with the duo to really shut down the Eagles’ run game. Aside from Miles Sanders’ 74-yard touchdown run in the first quarter, the Steelers clamped down hard on Philly’s run game, making them one-dimensional.

Bud Dupree and TJ Watt were mostly absent throughout the game, which is concerning considering they had favorable matchups on the edge. I know Watt was held A LOT Sunday, but Dupree missed a key sack in the backfield and really didn’t make much of an impact overall.

Watt recorded an early sack on his birthday and Dupree finished with half a sack, but they needed to be better on Sunday.

Inside, Vince Williams made a statement right way with a TFL on Sanders on the first play of the game. He was called for a bogus roughing the passer penalty and after that was rather quiet. I’d like to see him on the field more.

Devin Bush seemed to be non-existent on Sunday.

The Minkah Fitzpatrick slander has to stop. Sure, he’s not a turnover machine so far this year, but that doesn’t mean he’s fallen off. Yes, his tackling issues have hurt, but him not forcing or creating turnovers right now isn’t on him. QBs aren’t targeting him.

They are targeting Joe Haden and Steven Nelson, both of whom seem to have regressed this season. Haden and Nelson really struggled to cover guys like Greg Ward Jr. and Travis Fulgham today, which is a major concern.

Cam Sutton had a gaffe on Sunday too, failing to get proper depth in his drop on 3rd and 17, allowing an easy pitch and catch to Fulgham for 20.

Mike Hilton was the best defensive back on the day, despite his missed tackle on Sanders’ 74-yard touchdown run. Hilton sacked Wentz, giving him three sacks on the year, and led the Steelers in tackles.

Terrell Edmunds was solid too, driving downhill on a few throws to break up the pass and tackled really well, finishing with five tackles.

I was really, really pleased with the Steelers’ special teams on Sunday.

I thought Dustin Colquitt punted the football well on the two times he did, pinning the Eagles inside the 20-yard-line once. Chris Boswell drilled his lone field goal of the day and all five extra points, while McCloud showed some serious juice again on kick returns.

What stood out though was the coverage unites. I was really pleased with guys like Jordan Dangerfield and James Pierre, who came through with big open field stops on special teams.