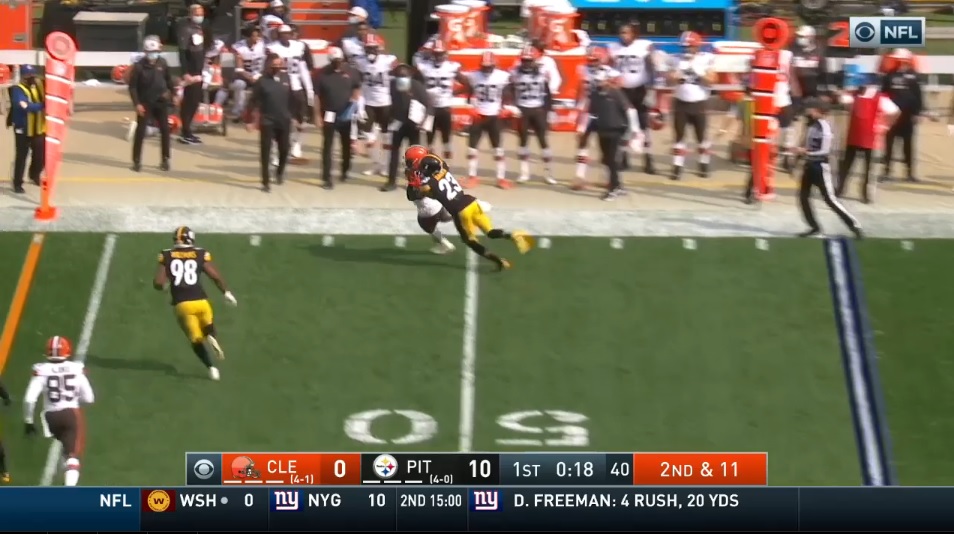 For all the talk leading up to Sunday’s Browns-Steelers matchup at Heinz Field being a chance for the Browns to assert themselves as the real deal in the AFC North and the NFL overall, it was the Steelers who asserted themselves – again – as big brother in the long-standing rivalry.

On top of all that, the Steelers turned in their second best tackling performance on the young season.

While Joe Haden had a great day in coverage against the Browns, he struggled in the tackling department, namely against Browns running back Kareem Hunt.

Mike Hilton also missed a tackle on Kareem Hunt in the win, a missed tackle that ultimately knocked Hilton from the game with a left shoulder injury.

As far as TJ Watt’s and Cam Heyward’s misses go, they put a ton of pressure on Baker Mayfield, getting hands on him. However, Mayfield slipped out of both sacks and got rid of the ball. Heyward’s missed sack was on third down and resulted in an incomplete pass, while Watt’s led directly to Cam Sutton’s interception as Mayfield scrambled right and lofted a prayer down the right sideline.

I feel bad picking on Haden here, but let’s take a look at both misses.

I’m not a fan of Haden’s effort here. I know Hunt is a powerful back and it’s a mismatch for Haden meeting him in the hole one on one like this, but Haden must do a better job here of coming downhill, sticking his face in the fan and wrapping up Hunt’s lower half.

Instead, Haden dips his shoulder and lets Hunt bounce off of, letting Hunt pick up the first down.

Later in the first quarter, Haden found himself in space one on one with Hunt.

A few plays after going low and missing on Hunt, Haden tries to go high in the flats and slips right off of Hunt’s shoulders on second and 11, allowing Hunt to pick up the first down.

Offensively, the Steelers had a great day in the forced missed tackles department, dominating the Browns to win the game within the game by a margin of +6.

Mike Tomlin wanted James Conner to start fast on Sunday and run hard. That’s just what the former Pitt product did, forcing four of his seven forced misses on the first drive of the game, leading the Steelers to a field goal.

In fact, Steelers running backs forced five total misses on the first drive of the game, setting the tone against a strong Browns defensive line.

I’ve heard a lot in the past that Conner can’t create for himself and won’t make defenders miss in the backfield.

So much for that.

Look at the lateral explosion here to sidestep this would-be tackle for loss by Andrew Sendejo ended up in a good run for Conner, setting up the Steelers’ offense ahead of the chains in the first quarter.

Conner picked on Sendejo later in the game, once again in the hole.

As Tony Romo said during the broadcast, that’s right out of Madden with the circle button. Conner has been attempting to set up the spin move all season. This time, he ripped one off at the perfect time.

Late in the game, Chase Claypool made another star-studded play, this time after the catch.

Claypool does a great job of pushing inside here, getting Cleveland corner Terrance Mitchell off of the sideline. Claypool knows he has the short-area burst to turn the corner on Mitchell.

He does just that and nearly scores.

Claypool is becoming a complete star right before our eyes.