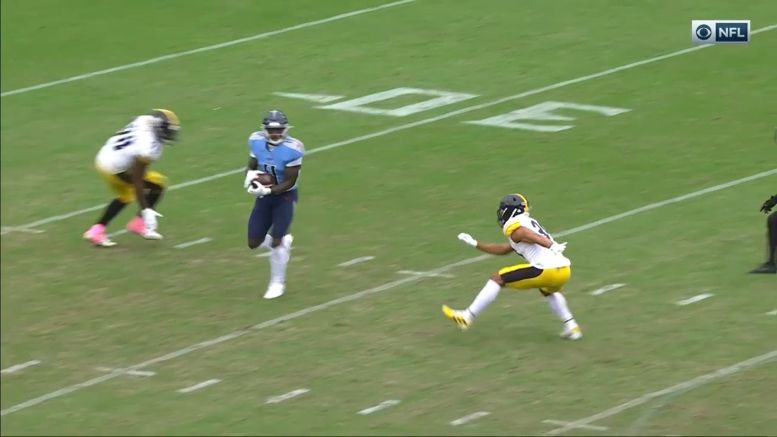 The Pittsburgh Steelers’ defense is not nearly as bad as some want to make it out to be. It’s nothing to be ashamed of to give up 24 points to a previously undefeated team, in a win, against a team that averages over 30 points per game, just as a random example.

All-Pro safety Minkah Fitzpatrick took the blame for that one, but insisted that it had nothing to do with miscommunication. It was a mechanical error when he misread the result of the play, even though he knows he should have kept moving regardless of what his eyes were telling him.

“I don’t think there’s any miscommunications that led to big plays. The only big play that happened that was a miscue by me was when 11 caught that pass”, he said, referring to the A.J. Brown 73-yard touchdown pass in the third quarter. “All that happened was, I thought that Vince was gonna tip the ball, so I stopped my feet, and 11 was able to run around me because my feet were stopped”.

Of course, that’s how most big plays happen, just one person not quite doing what they’re supposed to do. Sometimes they happen. I don’t know that there has ever been a defense, at least in the live ball era, that didn’t give up at least a play or two of 40-plus yards.

The play came on 2nd and 8 from the Titans’ 27-yard line. Steven Nelson was playing off coverage with Brown running a crossing route. Vince Williams dropped into a shallow zone and made a stab at deflecting the ball, but narrowly missed.

That allowed Brown to field the ball virtually in-stride, and as Fitzpatrick said, he stopped his feet coming down over the middle, which allowed the big receiver to turn the corner on him, and once that happened, there was nobody else to stop him.

Man, Vince liked to have had a hand on this. Also, I think Minkah was expecting the completion to come on the other side of Vince. #Steelers pic.twitter.com/lbc7TkfJlo

That turned a 24-7 game into a 24-14 game, and suddenly the Titans, who recorded fourth-quarter comebacks in four of their first five games, were rejuvenated and looking to secure yet another come-from-behind victory.

Fortunately, thanks in part to a missed field goal, that wouldn’t happen, and the Steelers would escape another mistake without penalty. Eventually, one mistake or another is bound to catch up with them, however, unless they are quick to clean up the problems as they pop up.