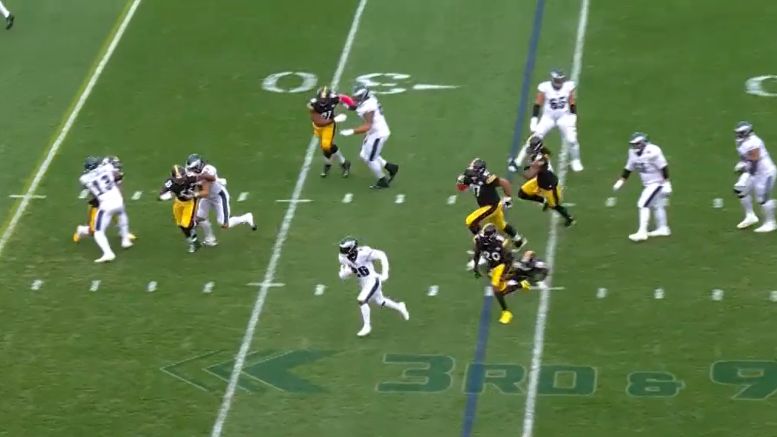 The Pittsburgh Steelers entered the second quarter of the regular season this year with by far the best run defense in the NFL, statistically speaking. The Philadelphia Eagle came to town intending to dispute that distinction, just as they wanted to challenge Pittsburgh as the sack capital not just in the state, but in the NFL.

While the Eagles by no means came in with a run-heavy attack, they were able to run effectively with Miles Sanders, at least in spurts, through the first half. The running back scored two touchdowns on the ground within the first 20 minutes of the game, one very long, one very short.

At the tail end of the first quarter, Philadelphia was facing a third and nine at its own 26-yard line when Sanders got the draw. With Cameron Sutton coming in on a blitz and Bud Dupree running a stunt, it allowed the running back open grass, which he took the distance for a 74-yard score.

He also finished off the Eagles’ next drive, though this time from the one-yard line with the visiting team’s first sustained offensive drive of the game, though it did receive an assist from a questionable roughing the passer call on Vince Williams. He showed good effort getting into the end zone in the goal-to-go scenario.

By that point in the game, The Eagles had 83 yards rushing on eight carries. Obviously that is skewed heavily by the 74-yard run, but that converts to an average of more than 10 yards per rush. And a one-yard run that ends in a touchdown is still the best possible result in that scenario.

The run defense stabilized in the second half, but that was largely because the Eagles were trailing throughout the process, for the most part by multiple possessions, so they were not spending much time running the ball, focusing heavily on the passing game, which was frankly having success on third downs.

In the end, they finished with 94 rushing yards on 16 carries, averaging 5.9 yards per carry. Granted, if you remove the two outliers (the two touchdowns), they managed just 19 yards on their other 14 carries, an average of just 1.4 yards per carry. And, of course, you don’t actually get to remove the outliers. That 74-yard run still counts.

The bottom line is that the run defense is something to monitor going forward. They have had two very good games against the run, and then two suspect performances. You knew that they were not going to keep up the pace that they set in the first three games, but it’s clear that they have to gain some consistency from play to play.

Part of the problem has been the aggressiveness, which allows for some of the big plays in the backfield, but also opens up avenues for big plays when they don’t work. The cat blitz on the long Sanders touchdown was an example of that, putting a player out of position in the hopes of his getting home and making a play before it matters.