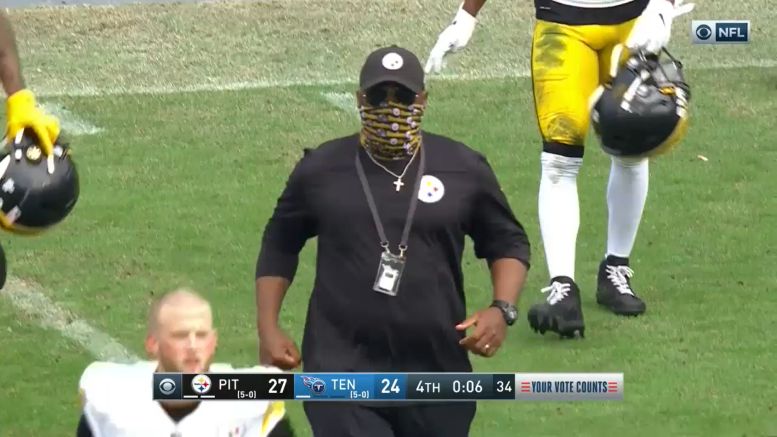 If there is one thing that the Pittsburgh Steelers should be concerned about going forward, it is the manner in which the defense is closing out games, because that has been a clear point of inconsistency so far through the first six games of the 2020 season, particularly in two of the past three weeks, and it was very nearly costly yesterday.

After piling up the points, with the offense scoring on each of its first four possessions, including three touchdowns, without the benefit of a defensive takeaway (though they did get a great punt return), the Steelers ultimately built up a 27-7 lead early in the second have before giving up 17 unanswered and requiring a missed field goal from 45 yards out to prevent the game from going into overtime.

“We’re looking to learn every Sunday. Hopefully we’re learning while winning”, head coach Mike Tomlin said after the game about what the Steelers can take away from winning in this fashion, which was less than pretty in the second half, but more an act of survival.

“There’s some lessons to be learned. You don’t win many games minus three”, he said, referring to the turnover margin. “I think we were minus three in the turnover game today. You don’t win many games giving up 70-yard touchdown passes. So it just kind of speaks to how our group is positioned. But definitely things to be learned from what transpired”.

Ben Roethlisberger threw three interceptions during the game after entering the day with just one on his first 165 pass attempts, the best and cleanest start of his entire career. The first was not particularly meaningful, a lob into the end zone at the end of the first half with 14 seconds to play in passing up a 55-yard field goal attempt, but the others were of concern, and provided a six-point swing that could have been worse.

There were certainly points in the second half in which it felt as though things were just unraveling for the Steelers in all phases in the game, and it was just a matter of whether or not the Titans would have enough time left in the game to complete the comeback.

Derrick Henry, for example, started moving the ball better than he was earlier in the game. Ryan Tannehill was getting the ball out of his hands and finding his wide receivers and tight ends. Their defense really clamped down in the second half and held the offense to just three points.

And now they get to face a team whose only loss is to the 6-1 Kansas City Chiefs. A team that has gotten the better of them more often than not in recent years, especially on their home turf, where Sunday’s game will be played. A game in which said opponent, the Baltimore Ravens, will have had an extra week to prepare. They had better take some lessons from this narrow victory and learn to apply it quickly to prevent a similar situation from happening in what may be the most important game of the regular season.