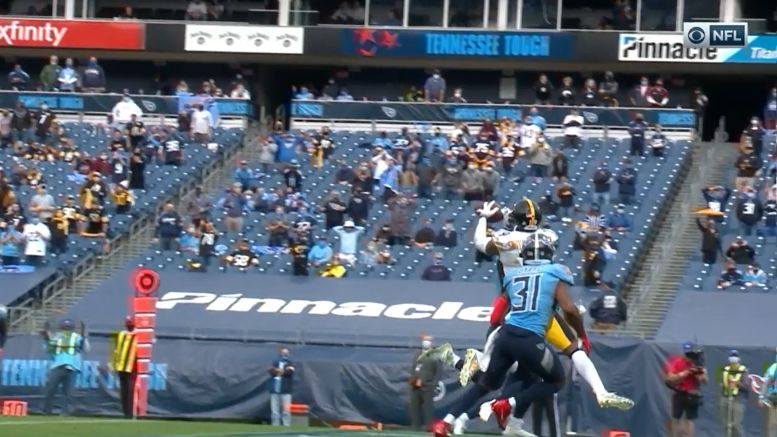 It wasn’t easy—at least not in the second half—but the Pittsburgh Steelers ultimately persevered, got a lucky break at the end of the game, and overcame an undefeated opponent on their own turf to advance to 6-0 themselves, the second-best start to a season in team history, having previously gone 7-0 in 1978. This is only their second start better than 4-0.

And this was their steepest challenge yet, taking on one of only two other teams who had not yet lost a game in 2020. Despite jumping out to a 24-7 halftime lead, the Titans would score 17 unanswered points after an early second-half field goal for Pittsburgh before finally missing a 45-yard game-tying field goal with 19 seconds to play. Rather than face overtime, there would only be the victory formation. And a couple sighs of relief. And an acknowledgement of their worthy adversaries.

“First of all, I’ve got to start by tipping my cap to the Tennessee Titans”, head coach Mike Tomlin said at the outset of his post-game press conference. “They are a mentally and physically tough group. We talked about it all week. We knew they wouldn’t flinch. They’ve been in these type of games more than we have, to be quite honest with you. We know that that was a winning edge for them, and it showed”.

The Titans, despite being 5-0 on the season, either trailed or were tied entering the fourth quarter in four of their previous five games. Ryan Tannehill already had four game-winning drives on the season heading into the game, and he nearly had a fifth, or at least a chance to force overtime, coming down to a missed field goal.

Of course, the Steelers helped to keep them into the game. A bad play by Minkah Fitzpatrick led to a 74-yard catch-and-run touchdown that had no business going anywhere near that far. Ben Roethlisberger threw three interceptions, including one in the end zone. These facts can’t go unacknowledged, and they didn’t.

“We had something to do with how the game got, as well”, Tomlin allowed. “We gave up a big play for a touchdown. We turned the ball over. When you do those things against good people, they’re gonna get back into the game 100 percent of the time”.

The end result is that they are now the clear number one team by record in the AFC, sitting at 6-0, the only undefeated team in the conference, but they are also on the doorstep of the most important game of the season (as the last two games have been), this on the road against the 5-1 Baltimore Ravens, who could take possession of the AFC North lead with a win next week.