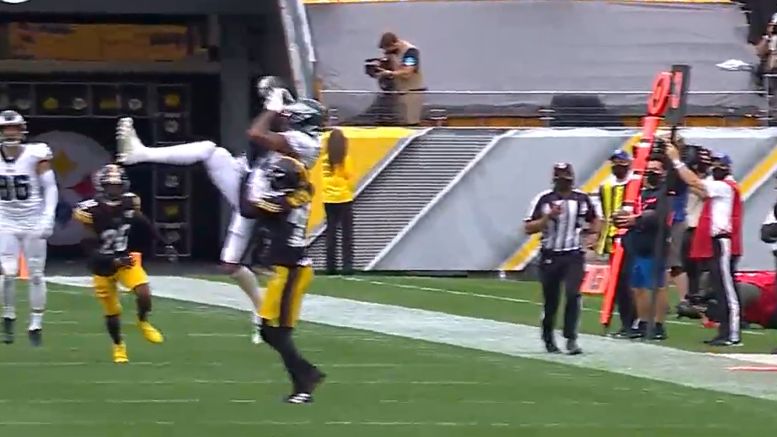 If there is ever to be a legend about Travis Fulgham, this afternoon is when it will have begun in earnest. While the second-year Philadelphia Eagles wide receiver had a big touchdown last week, he went off for what was very obviously a career day against the Pittsburgh Steelers’ defense and virtually every cornerback they had.

In all, the sixth-round pick out of Old Dominion caught 10 passes on 13 targets for 152 yards and the touchdown that brought the Eagles to within two points late in the game. So many of those catches came in critical moments. I believe half or more of his receptions, including the score, came on third down.

It was a dominating performance so evident that head coach Mike Tomlin could not fail to mention it as the Eagles put up 29 points on his unit. “They had guys like 13 stepping up and making combat catches”, he said after the game, referencing Fulgham’s jersey number. “Man, we had guys in position. They made some plays. They made some plays on the football”.

Fulgham is largely an unknown. Coming into this game, he had played just 100 snaps on offense in his career, and another 33 on special teams. He had just two receptions to his name on six total targets, and it felt like he might wind up being the answer to a trivia question.

The Steelers made the 6’2”, 215-pounder look like a star while the Eagles were without their top two wide receivers, Desean Jackson and Alshon Jeffery. But Tomlin said that he was familiar with him, for a more close-to-home reason.

Fulgham beat Mike Hilton repeatedly throughout the afternoon. He beat Steven Nelson. He beat Joe Haden as well. But it was finally Haden defending him on a 3rd-and-5 play with just minutes to go that proved to be the turn of the tide, forcing an incompletion.

Will this be the turning point in the career of a young wide receiver, with defenses beginning to be forced to take him seriously, or will this be an aberration? He put up over 1000 yards with nine touchdowns in his senior season in 2018 coming out of Conference USA. He has the physical traits, and he has the talent. Frankly, it would look at lot better for the Steelers if he does emerge as a very good player.