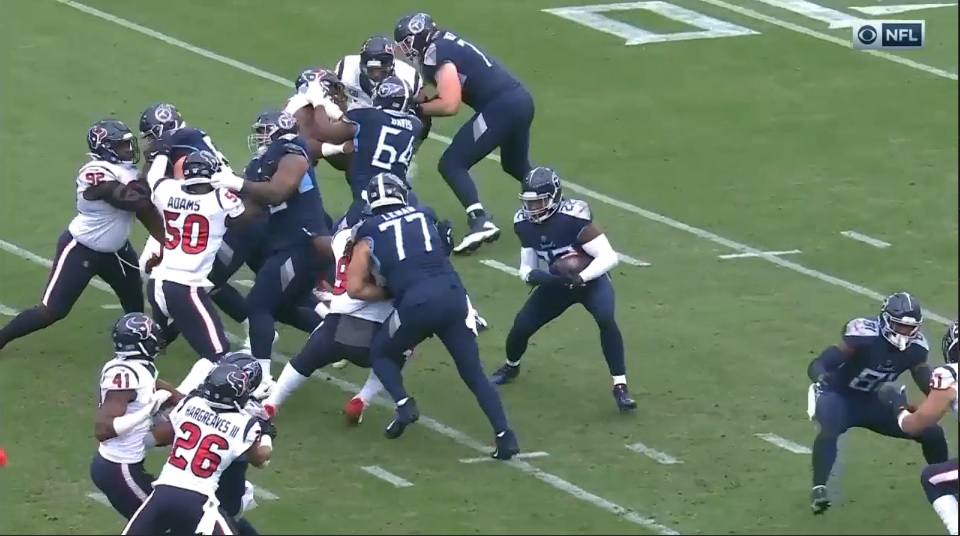 Often times with my matchup of the weeks I try to get away from the status quo and be a tad bit more unique of what matchup to be on the lookout for from week to week. However, this week is going to boil down to an extremely simple concept in theory not so simple in execution.

After a week that he put up eye-popping numbers of 212 yards on only 22 carries, another 52 yards through the air, and 2 touchdowns, one of which won the game in overtime, it’s hard not to put a massive focus on him. Henry put up a few pedestrian seasons to start his career, he’s since blown up and become a massive part of the Titans offense. After starting 2019 2-4, the Titans decided to bench former top pick Marcus Mariota for Ryan Tannehill and the offense really started to click with Henry finishing 7-3 before losing in the AFC Championship to the eventual Super Bowl Champion, the Kansas City Chiefs.

You can see below how much the change at QB helped Henry become more efficient.

The Titans are extremely similar to the Browns in terms of much of their offenses success coming from a successful power run game with tons of play action. This means we should expect to see an extremely similar gameplan when it comes to how Keith Butler and the Pittsburgh defense prepare for this game.

One way to gameplan against offenses with high play-action usage is playing a lot of 2-high coverages that ensure safeties are able to help over the top on both sides of the field. Another is simply fielding defense that starts a fearsome group of defensive lineman that are able to take away the run game and force a team to have a true drop back game. The Steelers successfully executed both of those key points last Sunday.

At no point was this more obvious than both of the Steelers 4 &1 run stops against the Browns. It’s the perfect personification of how dominant this defensive line has been throughout the first 5 gamers of the season. You can see how easily every man wins their job to not give the Browns running back a glimmer of hope to get past the sticks.

It’s going to take that type of concerted effort again Sunday to contain Henry. If you can get to him before he get’s all 240 pounds of him up to 4th gear, you got a great chance of bringing him down. Many of Henry’s unsuccessful runs are actually TFL’s because if you give him even the space to get the line of scrimmage his momentum alone with carry the defense 3 more yards. On the few unsuccessful runs Henry had Sunday the Texans defensive lineman win with swim moves on the Titans tackles were able to bring Henry down for a rare loss on the play.

Once Henry gets to the past the first-level is where he really brings the damage. We all know physically he’s a freak standing at 6’3” 240 pounds. Mike Tomlin joked that the Steelers were going to have Bud Dupree be the scout running back this week to prepare. As funny as the joke was, that’s really the true comparison. Once Henry gets to the second-level he’s an extremely difficult to bring down with a single linebacker and especially a single defensive back. His combination of size, speed, and power is too much and then it’s off to the races.

The Steelers haven’t missed many tackles this year, but I’m interested to see how that holds up this week. Henry’s not your traditional one cut, home run threat at running back, but he sure can make you pay if you miss just one tackle at the second level.

While Henry will be an obvious challenge to stop in his own the right the Steelers had an extra wrench thrown in their game plan once they learned that their leader at inside linebacker, Devin Bush was lost for the season with an ACL tear. In comes former undrafted free agent, Robert Spillane, to attempt to fill last year’s first-round pick’s shoes against the league’s top rusher.

The Browns high powered run game proved to be just another highlight reel for this Steelers run defense. Can they repeat? The Titans are 15-0 when Henry has 100+ yards rushing. I think that’s a fair number to benchmark for Pittsburgh Sunday. If they can manage to hold Henry under 100, I have faith that the defense will be able to mostly contain Tannehill while the letting the offense spread the game open. We will see come Sunday!