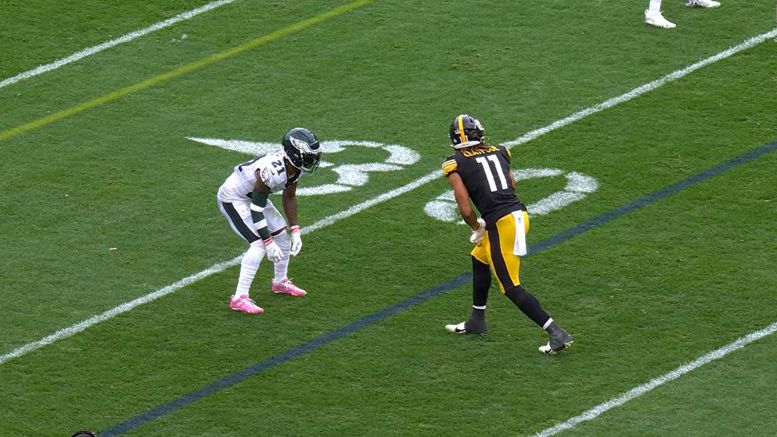 One thing that Pittsburgh Steelers quarterback Ben Roethlisberger typically does not like to do is to throw against conventional Cover 2 defenses. For whatever reason, he has always had a more difficult time navigating that look—and he did just throw three interceptions against one of them in the Tennessee Titans, so perhaps he is wise to.

Of course, he did throw the ball 49 times against the Titans on Sunday, but he kept it in front of him. 34 of his pass attempts traveled no more than nine yards beyond the line of scrimmage, with eight passes being thrown behind the line. He did attempt five deep balls of 20-plus air yards, completing two for 43 yards. He also attempted eight intermediate throws, completing just two for 39 yards.

His pass distribution probably says a lot about why JuJu Smith-Schuster and Diontae Johnson alone combined for 29 of Roethlisberger’s 49 pass attempts during the game, over 60 percent of his total pass attempts. Both James Conner and Eric Ebron also saw season-high target numbers. James Washington and Chase Claypool whose average depths of target tend to be further afield, combined for two targets, splitting one reception that lost yardage.

“I think for them they wasn’t trying to get nothing up top. I think they were trying a lot of Tampa 2, a lot of deep, two safeties in the back, trying to keep everything in front of them”, Smith-Schuster said after the game about Tennessee’s defense and why the deep threats were a virtual non-factor in the game. “With that being said, Diontae backs out one-on-one, we’re throwing everything short. Me playing on front side, everything that’s short. And that’s the kind of game it was. Not every game is going to be a home run, but, hey, it is what it is. And like I said, you just never know whose turn it is to ball every week”.

The Steelers’ passing game wasn’t very efficient at all, averaging just 5.5 yards per attempt, but that doesn’t really matter when you’re winning the possession downs as the Steelers did (going 13-for-18 on third down) and winning the time of possession by over 12 minutes.

I think it’s fair to say that we haven’t seen the last of Chase Claypool, the rookie second-round pick who caught 17 passes for 335 yards and four touchdowns in his first six games, also adding two more touchdowns on the ground. Washington’s role may be reduced while the skill positions are at full health, but he is going to be a factor in other games during the year as well.