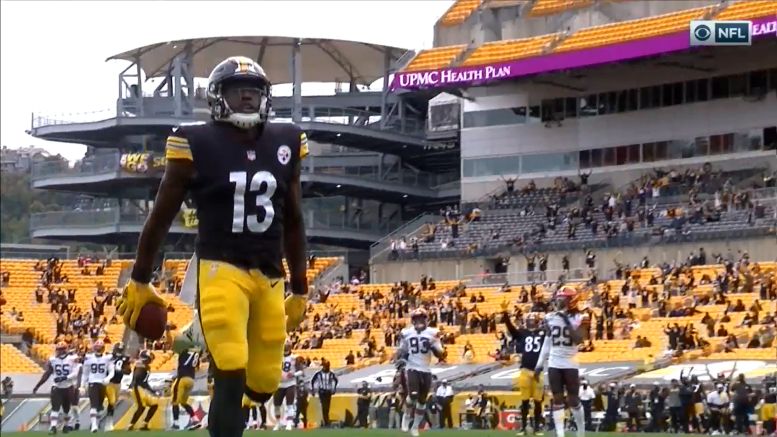 With Diontae Johnson out for yesterday’s game, most, I would imagine, entered the day assuming that it would mean considerably more action for rookie wide receiver Chase Claypool. Pittsburgh Steelers fans were not paying much mind to the third-year James Washington, who actually led the team in receiving yards last year.

Ben Roethlisberger looked his way a lot on the opening couple of drives. Of his seven pass attempts, he threw in Washington’s direction four times, though only successfully completed one pass, that being a 27-yard over-the-shoulder conversion on third down. His second pass was threatening another big play, but it was a bit long.

But the connection was back a few drives later, Ben Roethlisberger finding Washington twice more—first for a short reception, and then connecting on a 28-yard touchdown, his second score of the season. He came into the year with four career touchdowns and is already halfway there to making that in just five games.

He did make a mental mistake at the end of the first half when he ran out of bounds on a third-and-18 play when they were trying to force the Brown to use their timeouts after Myles Garrett was able to get Roethlisberger on the ground the play before. A third-year player needs to show better awareness than that, but these things do happen.

Washington now his 17 receptions on the season for 185 yards and two touchdowns. His 11 yards per reception is actually strikingly low for him, but the tide is likely turning on that front as Roethlisberger warms up to his deep ball and finds more connections.

The two connected twice on deep targets yesterday, for 27 yards and then the 28-yard score, leaving Washington with 17 yards per reception on the day. He finished the afternoon catching four passes for 68 yards—the only player other than Chase Claypool for the Steelers who had double-digit receiving yards, or more than two receptions.

I’m sure not many thought that the Steelers would put up 31 points of offense in a game in which Johnson did not even play, and in which JuJu Smith-Schuster contributed just two receptions for a whopping six yards, but Washington and the rookie stepped up in the sparse passing game on the day, even if it produced just one score—they scored three times on the ground.

It will be interesting to see how the passing game evolves over the course of the year. truthfully, Roethlisberger could stand to be more efficient, and his average depth of target has been quite shallow this year. More deep targets to Washington and Claypool could change things, and allow the former to be more involved. He did have the most targets on the day.