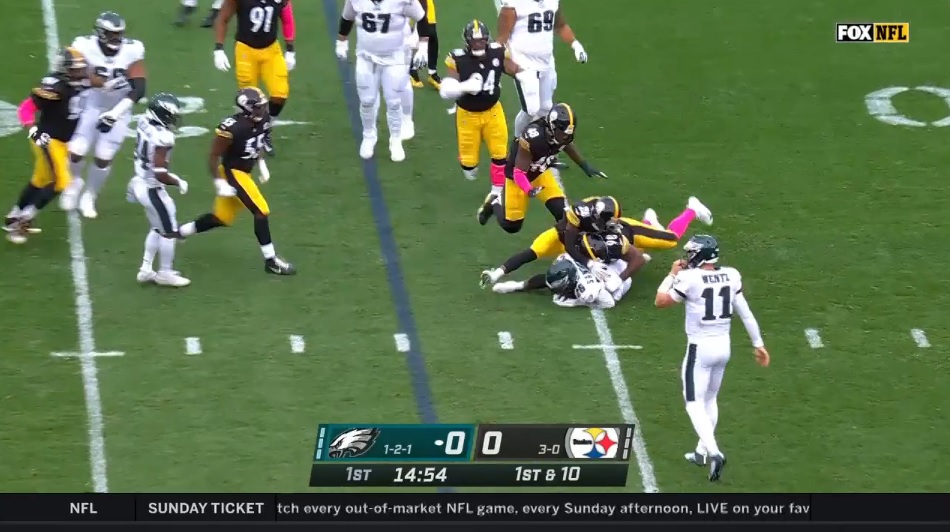 I promise we’ll talk about the Steelers’ issues in the secondary later this week. But before we get to the negative, I wanted to highlight one of the biggest positives and most pleasant surprises this season in NT Tyson Alualu. He’s one reason why the team’s run defense has been so stellar, save for Miles Sanders’ 74 yard score.

First play of Sunday’s game. Vince Williams flies into the backfield to drop Sanders for a two yard loss. Great play by Williams, that’s his strength, but it’s Alualu who makes the play happen. Zone run to the right. Goal here is for the RG and LG to takeover the frontside block, allowing the RT and C to climb to the 2nd level.

Against Stephon Tuitt, the block works. The RG overtakes the block, releasing the RT to the second level (though I’m not sure who he’s working towards). But the same doesn’t happen between the Eagles’ LG and C. Tyson Alualu does a great job of working down the line and staying engaged with center Jason Kelce long enough so he can’t get off the first level block and work to Vince Williams.

That allows Williams to shoot the A gap free, get into the backfield, and finish the play with his league-leading 9th TFL of the season. Check out the whole play.

Check it out from the aerial view. It’s subtle but you can see Alualu grab Kelce’s jersey with his right hand to hold him from releasing.

It’s a crafty vet play that you can usually get away with. Refs can’t see that stuff in the middle of the pile unless you make it obvious. The combination of him staying strong to the block, not allowing himself to get reached, and that subtle hold allowed Williams to run in unblocked and make the play. Eagles punt two plays later, going three and out on their opening drive.

Pittsburgh’s defensive line certainly has a different feel than a decade ago. Rightfully so. They have terrific, well-paid athletes like Cam Heyward and Stephon Tuitt. Guys who can penetrate, shoot gaps, and create chaos. Alualu isn’t Casey Hampton but he’s an older school run defender with great technique, strength, and leverage. Now the man in the middle, his goal is still to activate the linebackers behind him to run free and clean things up. Linebackers get the glory like Williams did here. But the defensive linemen are often the dudes who are doing the dirty work up front and it’s part of what makes this front seven so stingy versus the run.