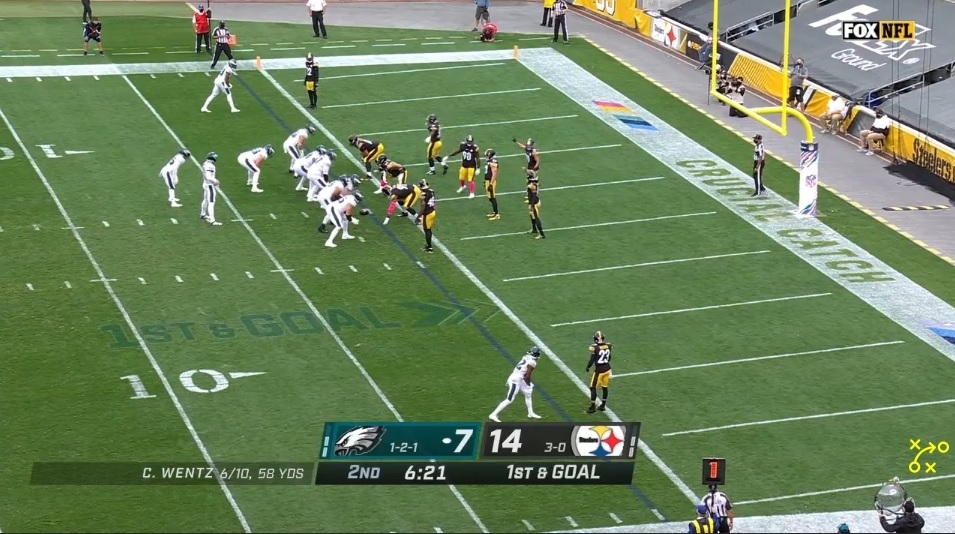 Entering week 6, TJ Watt is the highest graded edge rusher per Pro Football Focus (PFF). Last Sunday against the Eagles, Steelers’ defensive coordinator, Keith Butler, deployed Watt a little differently placing him off the ball on numerous occasions. This means exactly what it sounds like as Watt normally plays the outside linebacker position in a base 3-4, lining up “on the ball” at the line of scrimmage. Middle linebackers in a base 3-4 defense are your off-ball linebackers as they line up “off the ball,” a few yards upfield. Moving a traditional edge rusher like Watt around a defense is not new as it’s a technique that has been seen from the likes of Jadeveon Clowney, now a Titan, while he was with Houston and Seattle. Moving him around to different blitz different gaps presents an added challenge to opposing offenses’ gameplans and how their offensive lines should block him.

This is something we have rarely seen from Watt in his previous three seasons. He finished the game with one tackle for a loss and a pressure during his 8 off-ball snaps. Let’s dive into the tape and see how he stepped up to the challenge.

This was the most impressive snap Watt put on film from his off-ball snaps. The Steelers line up in a 3-3-5 look with Watt as the middle linebacker. He keys the pulling guard (67), scrapes down, sheds Zach Ertz’ (86) block, and finally tracks down the RB for a TFL. Have to give props to Vince Williams on this play too. He completely disrupts the play by taking out the pulling guard. It stretches run outside and into the waiting arms of Watt. Great team defense.

From the 3-3-5 look in the last clip to a 4-3 look on this play, the Steelers defense is really keeping offenses on their toes. Watt initially attacks the left guard then twists into the opposite A-gap generating a pressure on Eagles quarterback, Carson Wentz.

Here the Steelers initially lineup in their traditional sub-package look with Watt at his normal OLB position. Right before the snap, Watt rushes across the formation to fake a B-gap blitz before dropping into zone coverage. He does a solid job disrupting any pass lanes Wentz wanted underneath. It’s likely Wentz could have completed the pass to the receiver just above the numbers around the 27-yard line for a first down but due to either Watt’s presence or Cam Heyward’s initial pressure, it makes Wentz pull the ball down.

Now it’s time to get into the not so pretty snaps of Watt’s off-ball experiment. The Steelers are again in a 4-3 look at the snap and Watt tries to sneak through the right A-gap. The Eagles right guard is ready for it though and makes quick work of him, easily putting him on his butt and out of the play.

On the Eagles’ 2nd touchdown of the game, Watt, through Vince Williams’ coaching, blitzes the right B-gap. Only this time he is greeted by the Eagles 6’8” 350-pound tackle,

Jordan Mailata (68), pulling across the formation. There’s really not much Watt can do here as Eagles runningback, Miles Sanders (26), cuts back anyways, but you can compare how a veteran linebacker like Vince Williams kept his head on a swivel and handled the pulling lineman from Watt’s TFL clip vs. a novice off-ball player like Watt on this play. He gets too keyed in on the ball and gets leveled.

This is the last play we will look at. The Steelers line up in a dime defense which means you have 6 defensive backs on the field. The Eagles run a zone-read at the dime look. You can see Watt follows the flow of the line and takes himself out of the play doing so. Wentz pulls the ball here but if he gives to Sanders (26) Watt’s vacated area leaves a massive hole for a cutback.

TJ Watt’s off-ball snaps generated a mixed bag of results, but like any other time you take a player away from his natural position, you can’t expect all-pro results out of the gate. We’re obviously not evaluating this as Watt moving to MLB full-time, but if this is something the Steelers want to continue to do a handful of snaps a game it will keep offensive lines on their toes. I can see Watt’s skillset and motor being successful at the spot. It will just take some more game reps and experience before seeing him get more comfortable at the position.