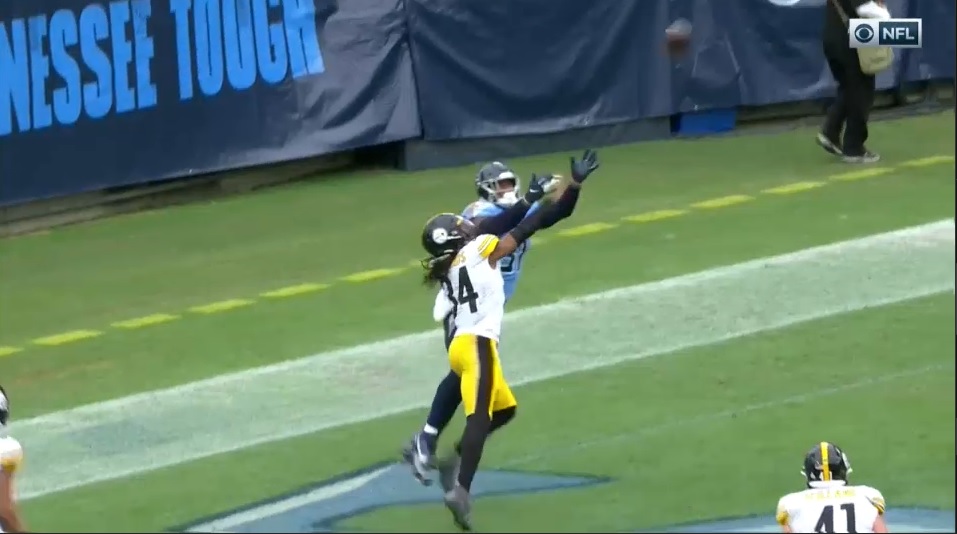 Terrell Edmunds was always placed behind the 8-ball. It’s likely he was over-drafted by the Steelers in the 2018 first-round which automatically placed lofty expectations on an extremely raw player. He was thrown to the wolves his rookie season due to injuries at the position and didn’t play terribly, but always left you wanting more. Then, he followed up his rookie year with a 100-tackle performance, but again struggled in coverage and lacked any sort of ball skills. It’s easy to see why Steelers Nation was asking for more from Edmunds heading into year three. With that being said, he’s far from an Artie Burns or Jarvis Jones level bust.

With last year’s acquisition of all-pro, Minkah Fitzpatrick, Edmunds is able to play more to his strengths assuming his duties near the line of scrimmage where he can utilize his speed and tackling abilities. While he still struggles overall with his ball skills he’s really put together a solid few weeks. If Edmunds can step up and develop at a similar rate as Bud Dupree, another former first-round draft pick that fans frequently called a bust, this already great defense can take another giant step forward.

Last week against an extremely efficient Tennessee Titans offense, Edmunds was called upon to fill the loss of Devin Bush with more responsibilities in run support and man coverage on tight ends. In a game where Edmunds actually played his lowest percentage of defensive snaps of the season at 84%, he didn’t disappoint.

Edmunds didn’t show up much on film in the first half. There was a ton of run stuffs that didn’t allow Derrick Henry to even get to the second level and he covered well in the backend so much so that he wasn’t targeted at all.

Below is an example of what the first half looked like for him. Here on 3rd & goal, Edmunds ends up manned up with the tight end. He walls off the inside to prevent any sort of seam throw. Then blankets the TE down the backline of the endzone. No chance for a throw at all. Looking ahead to this week against the Ravens’ talented tight group this is the type of coverage the Steelers are going to need from Edmunds in the red zone.

After the aforementioned quiet first half, Edmunds came out in the second half with his hair on fire. You can see on this play he was essentially used as an EDGE player. He’s blitzing all the way and has too quick of a get off for the Titans receiver to be able to reach him. Then, even after he’s pushed and off-balance he’s still able to make the tackle behind the line of scrimmage on Henry.

The very next snap Edmunds make another play. The Steelers are in Cover 4 on 3 & Long and Edmunds, as my college coach called it, “tennis balls” at 12 yards reading the QB’s eyes. As soon as Ryan Tannehill flips his hips right, Edmunds breaks on the route and is almost able to pick this one off. If he does AND stays on his feet it’s a good chance he scores. I’ll take this type of diagnosing from Edmunds at this point and he gets the defense off the field on third-down. Have to walk before you can run.

Edmunds also played a huge part in the initial goal-line stop early in the fourth quarter that was nullified by a fourth-down defensive holding call on Fitzpatrick. On second-down of the initial set of downs, you can see Edmunds initially is manned up with Corey Davis (#84) but when he commits to the flat, Edmunds and Joe Haden “banjo” the coverage (switch men). Even while Edmunds is likely helped by an underthrown ball, he shows off his makeup speed and does a great job not interfering, getting his head around, and making a play on the ball for an end-zone pass breakup.

His biggest flaw at this point has been his ability to finish at the catch point. All too often he is in the right spot and just doesn’t make a play on the ball or interferes. To see a play like that is awesome, but now we need to see it on a more consistent basis. As I previously mentioned this week is going to be huge for Edmunds as he likely will draw Mark Andrews in the red zone. I can almost guarantee there will be an extremely similar play to this thrown at Edmunds on Sunday, will he be able to make it again? We’ll see.

I always try to find the good and the bad while writing these film rooms. The play below was the only one I really didn’t like from Edmunds last week especially in the specific situation. It’s 3rd & 12 on the Titans final drive of the game and the Steelers are in a 2-man coverage, which basically means everyone is manned up except the two high safeties that will roam freely in their respective deep halves.

Haden funnels the route inside as he knows this is where he has help from Edmunds, but Edmunds in my opinion is playing his role far too conservative and is 20 yards away from the line of scrimmage, 10 yards away from the receiver that is about to break out when the ball is thrown. While this play is technically on Haden, you can see he definitely was expecting the over top help while he took away any type of underneath throw. Tannehill then just easily throws the ball over Haden for the first down deep in Steelers territory.

You can see when the receiver catches the ball, Edmunds who’s been breaking since the ball was in the air is still a good 5 yards away. Simply too much cushion on such a pivotal play. Thankfully, we know how the game ended but could have been the difference in the game.

With the superstar defense around him, Edmunds is seemingly coming into his own this season. We’ll continue to watch and evaluate his development as the season progresses. If you couldn’t tell by me mentioning it a few times already, this week versus Lamar Jackson and the Ravens’ talented group of tight ends will be a great test to see if Edmunds can stack another solid performance in his third season.