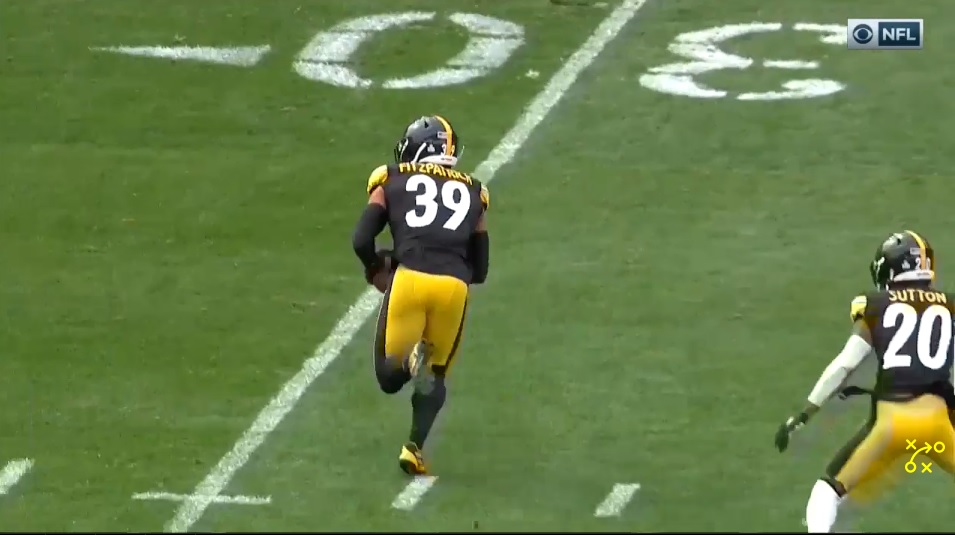 The question so many Steelers’ fans had this season. Where is Minkah Fitzpatrick?

Fitzpatrick picked off his first pass since Week 10 of last season, breaking a too-long drought for one of football’s biggest defensive playmakers. He did more than intercept it. Fitzpatrick ran the ball back 33 yards the other way into the end zone.

So how did it happen? And was this something we should’ve expected all along? Let’s take a look at the tape.

3rd and 3 for the Browns on their first possession. Steelers are playing Cover 1 Robber/Rat. Man-free coverage. Show two high look at the snap but rotate down, Terrell Edmunds the deep FS, Fitzpatrick the Robber, and everyone else playing man coverage.

As the Robber, Fitzpatrick is reading the QBs eyes. He’s not man, he’s not technically zone, but he’s watching the QB to “rob” of any crossing routes. He’s reading the QBs drop, his shoulders, and where the ball is going. 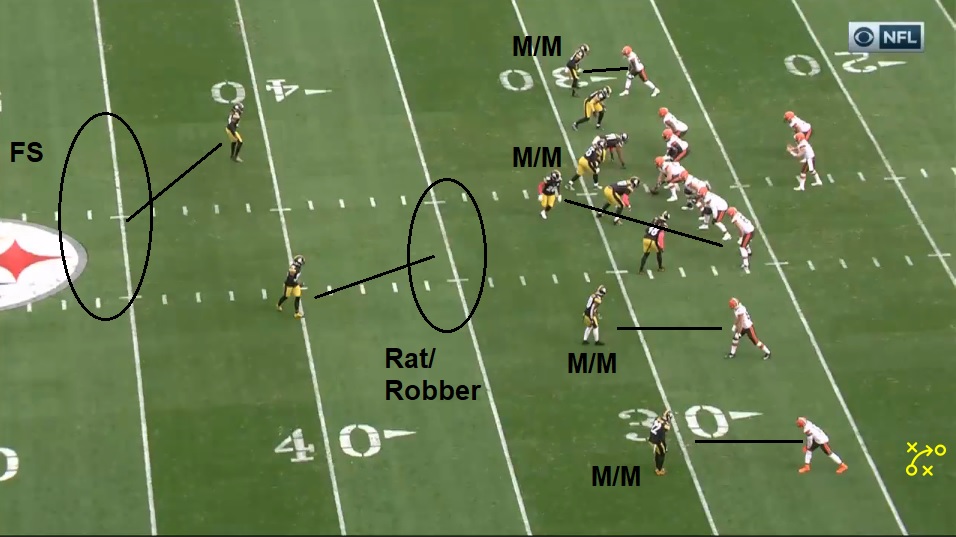 Mayfield locks in the slant to rookie TE Harrison Bryant the whole way. Cam Sutton has tight coverage but Mayfield tries to fit the ball in there, never seeing Fitzpatrick spinning down and “robbing” the route. Fitzpatrick jumps the throw, picks it off, and runs it in the other way.

“It was just a Robber concept,” Fitzpatrick said after the game. “I’m just reading the quarterback. Just reading Baker’s eyes. And he was looking that way, leaning that way. He threw the ball and I got it.”

Is this any different from how Fitzpatrick has been used? You’d be tempted to think so. After all, Fitzpatrick had been quiet the first four games of the season. But how they used him Sunday was no different than how they have for most of the season. Fitzpatrick hadn’t been stuck to deep centerfield this season like some have suggested. Even ,ore than last year, the team has been spinning him down closer to the line of scrimmage, often playing that Robber role, in an attempt to get him closer to the action.

Here’s an example of it every single week of the season. And I could add in a half dozen more.

Of course, no QB dared to throw Fitzpatrick’s way until Mayfield. In the first clip versus the Giants, Daniel Jones took the checkdown underneath as the Steelers got the stop on 3rd and 8. Versus Denver, Fitzpatrick spins down, QB Jeff Driskel pulls the ball and rolls right. Fitzpatrick’s able to close and force the ball out, an incompletion along the sideline broken up by Terrell Edmunds. Against Houston, Deshaun Watson checks it down the right flat well away from Fitzpatrick’s airspace and against the Eagles last week, Zach Ertz broke his route outside away from Fitzpatrick. The pass was still incomplete thanks to Steven Nelson’s tight coverage.

What happened Sunday wasn’t anything new or mystical. It just required patience for some QB to get a little careless and throw over the middle. Fitzpatrick did the rest, just as he did last season.