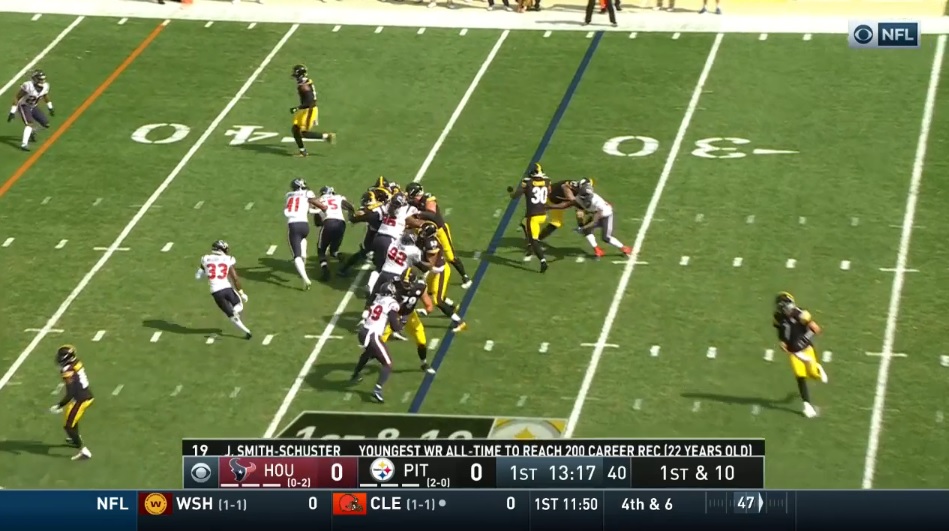 Eric Ebron made an impact as a receiver in Week 3 against the Houston Texans, catching the first of hopefully several redzone touchdowns this season. That’s why he was signed. Blocking ability was secondary. But he’s still a Steelers’ tight end, meaning he doesn’t get the luxury of being a glorified receiver who never gets his hands dirty. For him to be a good-enough blocker, the Steelers have to be smart with how they scheme him. While not perfect, they’re finding ways to make it work.

Ebron isn’t a small guy. Some TEs who come out of school look like receivers. 6’2, 230 pound types. Ebron exited North Carolina at 6’4, 250 with 33 inch arms. That mass is enough to get in the way of defenders if you’re intelligent about it. Leverage and angles are the way to go.

We showed a great example of that in our breakdown of the Steelers’ gap run scheme versus Houston. On paper, Eric Ebron vs JJ Watt, a literal Hall of Famer, would seem like a terrible matchup. But on this play, Ebron has leverage to hold Watt on this down block, getting some help from Vance McDonald (sort of), allowing the back to run off his hip and for a good gain.

Another example from the Texans came. A split zone run with Ebron, the off-ball tight end, pulling across and cutting the EMOL. Doesn’t need to be pretty. Just needs to show some toughness to trip up the ROLB and let the back hit the hole. Ebron succeeds.

Of course, the best way to hide Ebron’s blocking is to simply keep him off the field. Pittsburgh’s had an excellent four minute offense to close out each of their first three victories. They’ve run 15 plays over the final five minutes of the game, excluding kneeldowns. 13 of those have been runs. Of those 15 plays, Ebron’s been on the field for just ten of them whereas McDonald – the better blocker – has been out there for all 15.

More crucially, Ebron has been lined up to the outside of McDonald on eight of those ten snaps. Meaning he’s the furthest blocker on the line, often with the easiest or least important block. 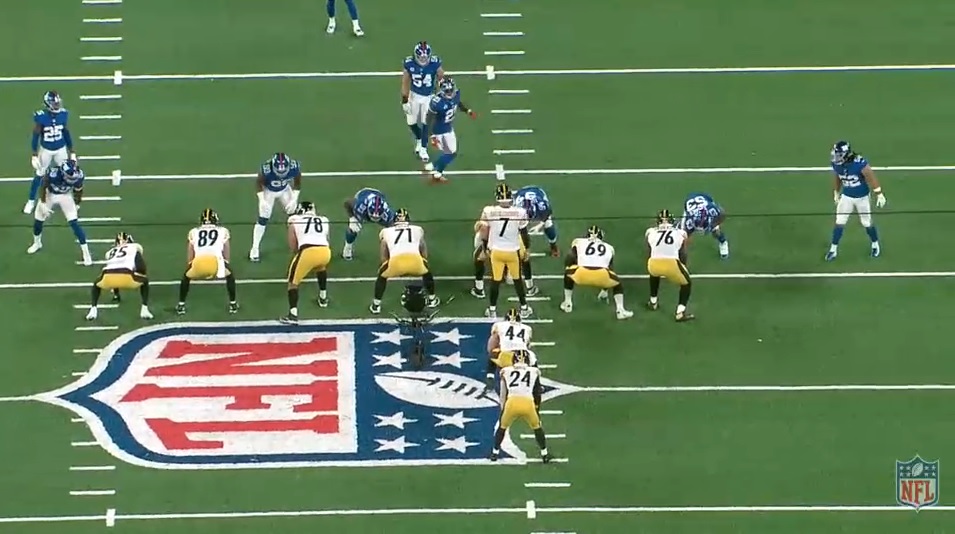 The two exceptions had Ebron lined up on the opposite side, each time the left side, than McDonald. On both snaps, the Steelers ran right towards McDonald. There may have been some miscommunication on this block between McDonald and Derek Watt so McDonald has been far from perfect either.

But it hasn’t been a flawless gameplan either. Ebron has struggled in situations where you’d expect him to. In the opener versus the Giants, he’s asked to combo block. Chip to the defensive end and then climb to the linebacker at the next level. The DE knocks him off balance and the linebacker blows him up, sending Ebron sprawling and skidding to the ground. That’s not the reason why this play failed but it sure was an ugly rep.

Fast forward a week. Goal line situation against Denver. He’s base blocking OLB Bradley Chubb. Chubb outleverages and overpowers him, knocking him back as the run goes nowhere. Pittsburgh ends up settling for a field goal.

Of course, you can’t perfectly scheme Ebron’s blocking every single time. Sometimes the defensive front makes it a tough task. Sometimes Ben Roethlisberger may make a check at the line that changes the run towards Ebron’s side. But if the Steelers continue what they’ve largely done, and Ebron keeps making the effort he’s showing, his run blocking won’t be a major liability. And the pros he offers in the pass game outweigh those cons.