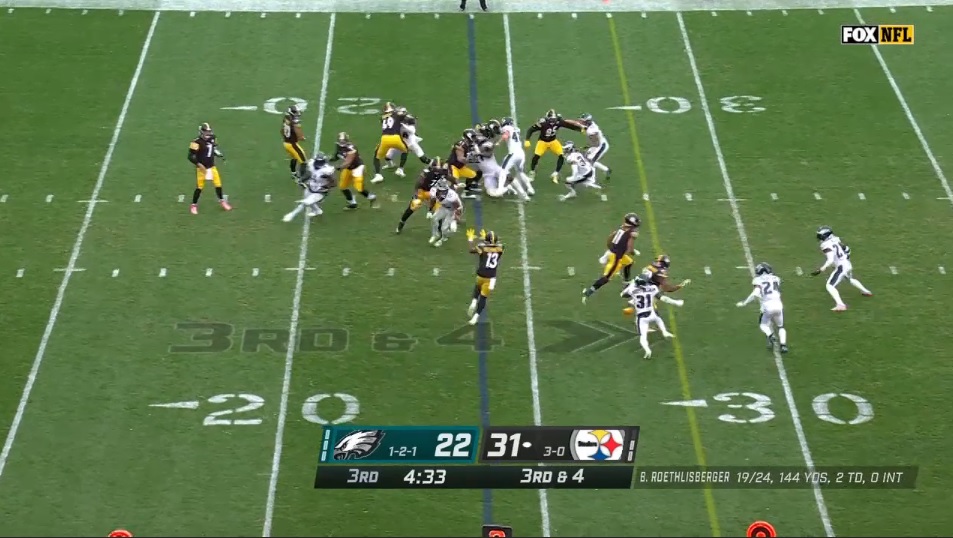 The Steelers improved to 4-0 over the weekend beating the Eagles 38-29. Following the week 5 win, there has been a lot of cries about the Steelers’ 3rd down defense after watching a former UDFA WR, Travis Fulgham, single-handedly torch the secondary. However, I think what has been overlooked is the fact that Pittsburgh’s offense also had a breakout game in their own right converting 11 of 15 times on 3rd downs.

For as bad as the Eagles have looked this season their defense was far from the problem as they ranked in the top 10 for most team defense stats heading into the game, including the league-lead in sacks. That makes this Steelers offensive performance that much more impressive. The Eagles front office made it a point in the offseason that they wanted to play more man on defense by going out and getting free agents like Darius Slay and Nickell-Robey Coleman. However, the Steelers were running great Cover 1 beaters to make those guys irrelevant and extend drives on 3rd downs.

These plays were almost the same exact play or concept at the line of scrimmage. Either Ben Roethlisberger identifies man coverage and puts a guy in motion or a receiver goes in motion to confirm man coverage with a slant underneath. We started to see a glimmer of these quick plays against the Broncos and Texans.

The first one we’ll dive into to digest the concept is in the Broncos game where this was used to convert 1 of only 2 3rd down conversions for the Steelers offense in that game. Jaylen Samuels motions out of the backfield into a trips bunch at the top of the screen. You can see the middle linebacker (47) follow but seemingly pass off coverage responsibilities to the outside linebacker (55). This is exactly what the Steelers are looking for as it’s basically a screen with no legitimate blocking. You can see both tight ends, Eric Ebron and Vance McDonald, are not running legitimate routes but also aren’t blocking, just taking up the defenders’ attention. This leaves Samuels space to slip under on a slant and get the 4 yards for the first down.

The second base is an RPO look that is seemingly already decided based on the coverage. This one coming against the Texans where Roethlisberger sees Cover 1 puts JuJu Smith-Schuster in motion to the slot. The run action brings the OLB upfield out of the passing lane and then it just leaves a simple slant with your #1 receiver against the opponent’s nickel corner. That’s a matchup you’ll take 10 out of 10 times on a 3rd and 4.

Both of these plays are called based on what Roethlisberger is seeing coverage wise in that situation. Then it essentially creates a 1 man route concept with the QB getting the ball out fast. It’s either there or thrown in the dirt. You have to give Fichtner props for these concepts as they’ve been extremely successful especially in 3 & short situations.

Fast-forwarding to the Eagles, who as I previously stated like to play a lot of man, this was the perfect storm. Ironically the 3 times the Steelers ran these concepts it was on 3 & 4’s in this game and all were conversions.

The first time we saw it in this game was to Ebron. This concept is the exact same as the Samuels example against the Broncos just dressed up differently. Roethlisberger put Diontae Johnson in motion putting 4 receivers on the right side. Naturally, this burdens the defense and causes them to start communicating all the way to the snap. Then, just as they situate, the ball snaps and you can again see the two inside receivers not doing anything except creating a natural screen for Ebron to run a slant behind. He catches it and then falls forward for the first down.

This play is the same concept as to the JuJu first down play against the Broncos. Simple and easy. You have Cover 1 vs an empty set, with Chase Claypool as WR3 (the same formation as the final touchdown of the game). This time instead of having 2 slants to the right you have 3 and Ben can pick his poison. He picks the shortest throw to 6’5” 240 lb. Claypool, who’s matched up with the 5’10” 190 lb. Cre’Von LeBlanc.  Another matchup you’ll take all day, Claypool makes the easy catch and falls forward for the first.

Does the last play look familiar to anyone? Again, you have cover 1 coverage. This time it’s Claypool who is motioned across the formation into trips bunch. You know what happens next. Claypool and Smith-Schuster create the wall leaving the space for Washington on the slant to move the chains.

These are not hard concepts by any means for the Steelers, but it’s so much fun to watch seeing how many different ways the same concept can be drawn up in the same situation. If you didn’t notice every single first down out of those five plays were a different receiver. It’s hard to key in on something when it’s always a different guy getting the ball.

What I’m excited to see is now that you’ve shown this is successful how can you self-scout and play off of it. After this game defenses’ light bulbs have to turn on when the Steelers have a trips bunch formation on a 3rd and 3,4, or 5-yard situation that this play is likely to happen. So, let’s play off of that preconceived notion and run a fake screen. Back in 2017, the Steelers ran almost this exact play on their first snap against the Lions. It’s a similar concept where the Steelers motion to trips and then have two blockers out in front of Antonio Brown. Except for this time Smith-Schuster leaks out uncovered down the sidelines for a big gain.

I’m hoping teams continue to try to go man against this team because the Steelers receivers have proven to be up to the task mentally and physically in these situations. However, the tape is out there now and you have to believe some defensive coordinator is going to have to draw up something to stop it. Until then, keep letting these strong physical receivers go to work underneath and picking up easy first downs.