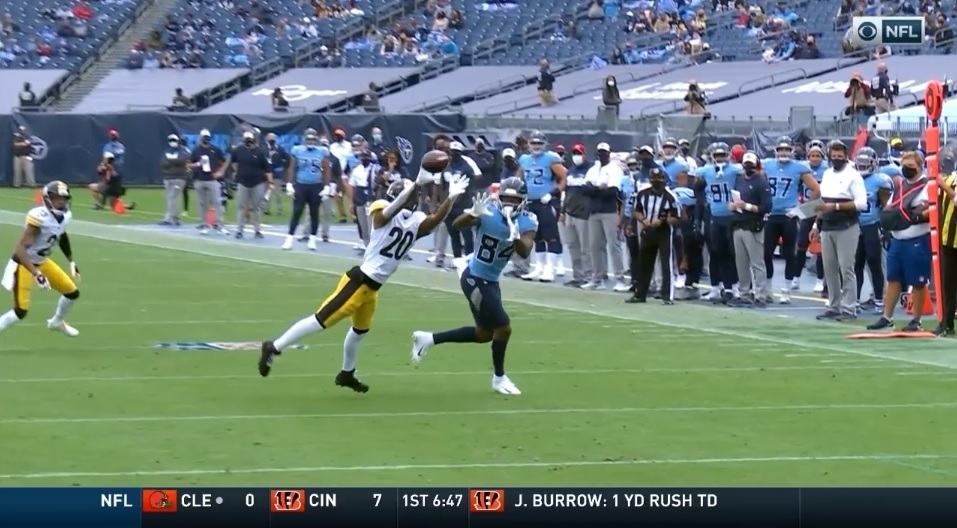 Throughout the week, the focus was on “next man up.” How would Robert Spillane fill in for Devin Bush? Rightly, that was the central focal point of the defense. But they were replacing another man on the defense, too. CB Mike Hilton missed just the second game of his career, giving Cam Sutton the nod as the team’s starting slot corner.

And sure, the difference between Sutton and Spillane is stark. Sutton has tons more experience and is much more proven. Still, it’s rare his role has been as expansive as it was, especially as the Titans played catchup in the second half. Sutton answered the call and had one of the best games of his career both in coverage and finishing plays as a tackler.

First play. Titans opening drive, first third down of the game. Hard to get a look at things pre-snap but Ryan Tannehill looks for Corey Davis along the right sideline. Sutton breaks on the football and breaks it up, narrowly missing out on an interception. That’s just a great read, plant, drive, and finish (minus failing to catch the ball).

Fast forward to late in the half. Tannehill complete this time to Davis underneath. Sutton quickly closes the space, breaks down, and drives Davis back. Absolutely no YAC allowed. Steelers force the punt, which ended in disaster after a bad snap, and put the offense in position for points before the end of the half (though they came away empty).

Second half. 3rd and 8. Steelers in dime with Sutton as the roving “dimebacker.” Steven Nelson kicking to the slot in these situations with Justin Layne coming on as the RCB. Pressure forces the ball out quick short of the sticks to TE Anthony Firkser, a big man listed at 6’2 246. Man has a good 50 pounds on Sutton. But Sutton hangs tough, wraps up and holds on. Nice job to run his feet to drag Firkser to the ground. Defensive stop, Titans forced to punt.

Final play. 2nd and 12 on the Titans’ last drive. Tannehill looking to hit Adam Humphries over the middle. Sutton is initially playing off coverage against Tennessee’s bunch set but closes the distance as the receiver makes his break and is aggressive on the throw. Hard to tell if he got a hand on it or not but made this an awfully tough catch Humphries is unable to bring in. Titans convert on the next play but this is still a great rep.

Sunday wasn’t perfect. He did allow a TD to Corey Davis, though there may have been miscommunication between him and Minkah Fitzpatrick and overall. Ryan Tannehill had a clean pocket and plenty of time. But overall, a very good day.

Those clips we showed of him in coverage are great and the strength of Sutton’s game. But I’m equally as impressed by the job he’s done as a tackler. That wasn’t his game coming out of Tennessee. But ever since training camp of 2019, Sutton has made big strides as a tackler and run supporter. Not to the level of Mike Hilton, the man he was replacing, but at a serviceable to at times good level.

Hilton has cemented himself as one of the league’s better nickel corners and will probably cost too much for the Steelers to retain this offseason. Sutton isn’t exactly signing for the minimum but as someone with far fewer snaps and an overall smaller resume, he should be cheaper to re-sign. Kevin Colbert would be wise to find a way to keep him because Sutton is an impressive, smart cover corner and improving in the other aspects of his game. Yesterday proved that.