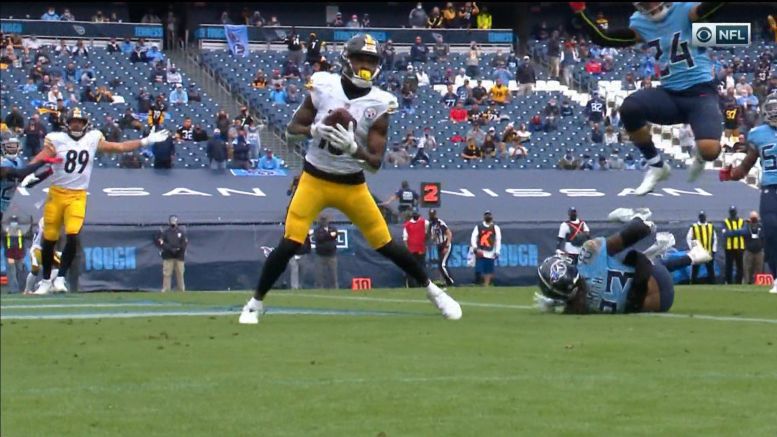 Diontae Johnson was targeted 23 times by Ben Roethlisberger over the course of the first two games of the season. He caught 14 passes for 149 yards in a touchdown during that time, in what was really his first significant action working with the future Hall of Fame quarterback, after he went down early last season with an elbow injury.

The Pittsburgh Steelers knew that Johnson was a talent. He led the team in receptions and receiving touchdowns last season while working primarily with Mason Rudolph and Devlin Hodges, so they felt good about how he would work with one of the great quarterbacks in the game in Roethlisberger.

Unsurprisingly, the results have been largely positive, and only injuries were proving to sidetrack their progress. After the first two games, the young wide receiver suffered a concussion early in the second quarter in week three.

Just one game after that, he suffered a back injury attempting to return a punt early in that game. He did not return in that one, and then sat out last week’s game, the first game that he has missed in his professional career in spite of the fact that he has dealt with a number of minor injuries.

But he was back on the field against the Tennessee Titans, and it didn’t take him long to get involved. In fact, he got into the end zone at the end of their opening drive for his second touchdown of the year for 11 yards. It was one of three receptions for him on the opening drive for a total of 39 yards, which also included a long third-down conversion in the middle of the drive.

Johnson would only add one more reception in the first half, but he made it count, a stop-and-turn nine-yard touchdown with under a minute remaining in the second quarter that put the Steelers up 24-7 at halftime. It was his first two-touchdown game—or at least his first two-receiving-touchdown game, as he had a receiving touchdown and a punt return touchdown against the Arizona Cardinals last week.

Although he did not get back into the end zone in the second half, he recorded five more receptions for 41 yards, and that included multiple key late third-down conversions. Unfortunately, he went down with an injury on his effort to convert that final third down and left the game.

It’s really quite remarkable how much talent this young man has in spite of the several obvious flaws, including his durability. He also drops passes, slips on plays, and has some occasional but crucial miscommunications.

But he gets so open so often that he’s always going to get a quick chance to make up for it, as exemplified by his 15 targets on the day. That is, when he is able to stay healthy and on the field. He just got back from a back injury, and now is dealing with a lower body injury in time for the Baltimore Ravens.