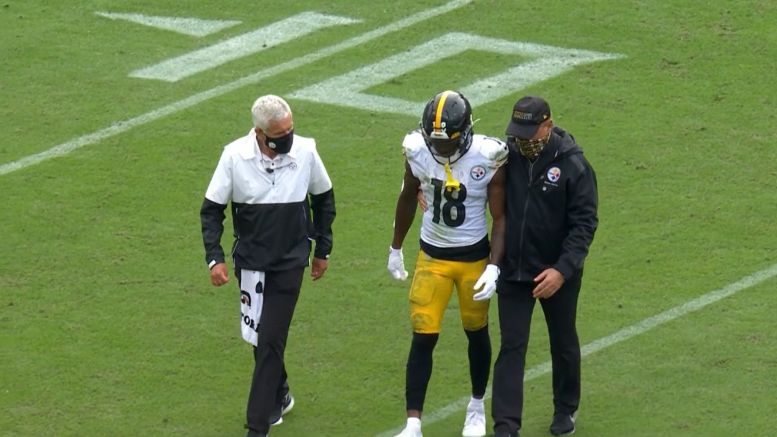 Some players just seem to get nicked up a lot. Up to this point in his career, Diontae Johnson has been one such player, even though to date it has only cost him one game. The second-year Pittsburgh Steelers wide receiver, however, only played 25 snaps in a three-game span prior to Sunday’s performance, in which he saw career-highs in targets, receptions, and receiving touchdowns.

Back in week three, Johnson suffered a concussion trying to finish on an end-around, which was the second concussion that he has suffered since entering the NFL. He recovered in time to play the following week, but sustained a back injury on a first-quarter punt return, and missed the rest of that game and the following game as well.

“It’s frustrating”, he admitted in speaking to reporters earlier today. “I mean, it’s a part of the game. You’ve just got to know how to handle it. You can’t just let it beat you down. You’ve got to have a strong mind about those things. That’s what I managed to do throughout those little injuries”.

Those little injuries go back all the way to rookie minicamp last year, and he dealt with a number of minor injuries throughout the 2019 season, even if they didn’t cost him much playing time. He did have surgery on his groin after the year was over.

And he started the season strong, seeing 23 targets over the first two games. He had a career-high 92 receiving yards in week two on eight receptions with a 28-yard touchdown. And he had one of his best games this past Sunday. “It felt good to get back out there with my brothers, and just to put in a game like that coming back off injury, it felt good to me, so I’m just looking to continue to keep it going”, he said.

Of course, he didn’t finish that game either. After converting on 3rd and 7, Johnson sustained an ankle/toe injury while being brought down on the tackle and had to exit the game in the late stages of the fourth quarter.

“It’s good”, he said about the injury, after not practicing yesterday. “I’m practicing today. Just got to stay on top of treatment and stuff, and I’ll be fine”.

Even with other options like JuJu Smith-Schuster, Eric Ebron, and Chase Claypool, this is a much stronger unit overall when Johnson is out there and healthy, particularly because he has the knack for being the open man, which is why Ben Roethlisberger has targeted him 38 times in the three full games they have played together this season.

Having a man who can consistently get open will be especially important Sunday against the cornerback trio of Marcus Peters, Marlon Humphrey, and Jimmy Smith against the Baltimore Ravens, a game that will determine who the leader in the AFC North is roughly halfway through the season.