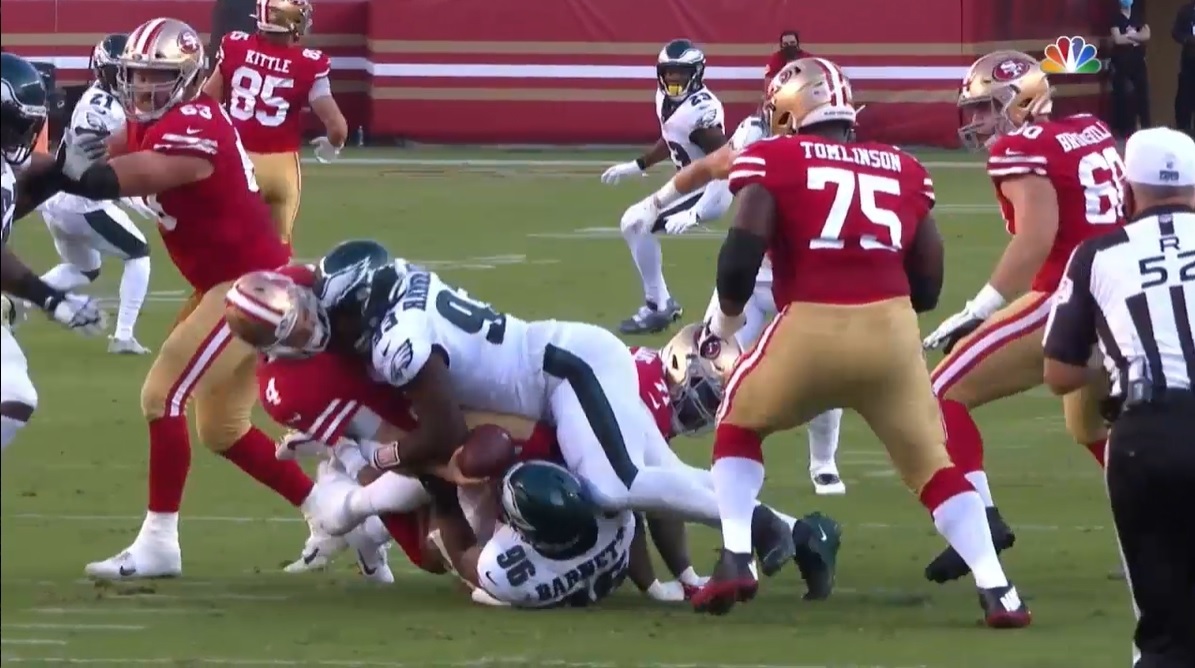 There’s no question the Philadelphia Eagles are off to a rocky start to the year. Carson Wentz has struggled, the offensive line is a MASH unit, and their linebackers have been poor. The strength of the team continues to be their defensive line, making for a heck of a battle this weekend.

Breaking down the Eagles, Mike Tomlin paid extra attention to the their front four.

“Onto Philadelphia, I think when you look at them and where they are as a football team in a recent rise to the top of the NFC East, a catalyst for that is their defensive front and the pressure they put on opposing quarterbacks,” Tomlin said. “I think they have 13 sacks over the last two football games, I thought they really took over that Bengal game toward the end and allowed that game to end in a tie with a dominant rush performance by the likes of Fletcher Cox and Brandon Graham. I saw the same thing this past weekend watching them play.”

The Eagles are the only team with more sacks than the Steelers with 17 through the first month of the season. As Tomlin pointed out, they dropped Joe Burrow and the Bengals eight times before taking down Nick Mullens and CJ Beathard five times in their first victory Sunday night. Defensive ends Josh Sweat and Brandon Graham are tied for the team lead with three but they’re getting contributions from everywhere. A whopping 13 players have at least half-a-sack. Compare that to the Steelers who *only* have nine. Tomlin made sure to point out their depth, a common theme for 4-3 fronts like what the Bengals have run over the years.

“But it goes beyond Cox and Graham. They have a seven- and eight-man rotation that’s a formidable one. They run a lot of fresh people at you. Malik Jackson, Javon Hargrave, a former Pittsburgh Steeler, they round out the interior element of the rush. They have some quality young players on the perimeter that supplement Graham. I think it starts there for us.”

Ten different defensive linemen have logged snaps for the Eagles. That’s partially due to injuries, Javon Hargrave missed the start of the year with a pec injury, but that’s rare depth most teams don’t boast. It allows Philadelphia to always play with fresh legs against the Steelers’ o-line, giving them an advantage, especially on long drives or the end of games.

Their d-line isn’t just a threat in the pass game, though that’s most obvious. Tomlin said they impact the run game too.

“If we want to have the type of rhythm that we need to have to have a winning performance, we have to neutralize that front, not only in terms of blocking and what they’re capable of from a pass rush standpoint—they lead the NFL in sacks—but handling their potential disruption in the run game. They’re penetrators. They’re disrupters. They pick off pullers. They create unblocked linebackers at the point of attack. We have to do a good job of neutralizing that group, covering them up and working to minimize their impact on the game.”

They have the seventh best run defense in football, allowing only 3.8 yards per carry. Two weeks ago, they held Joe Mixon and the Bengals to 48 total yards rushing. San Francisco went for over 100 Sunday night but that largely came off a fluky, Brandon Aiyuk 38 yard touchdown that was really a screen pass but technically counted as a backwards throw/run. Pittsburgh’s 3-0 start has largely been buoyed by their ability to run the ball in late-game situations, making winning in the trenches all the more important to keep their undefeated streak.