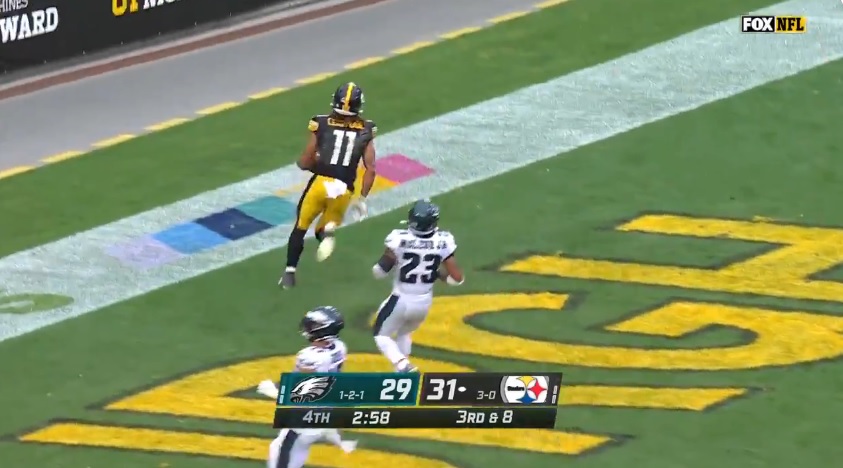 In front of a crowd of 5,000, the Pittsburgh Steelers defeated the Philadelphia Eagles in a game where the Steelers would score 30+ points for the first time since 2018.

Both teams struggled to move the ball offensively out of the gate. The Steelers forced the Eagles into three and outs on their first two possessions. After punting on their first possessions, Ben Roethlisberger and the Steelers engineered a 14 play, 72 yard drive that included three third down conversions. The drive was capped off by a jet sweep touchdown by rookie Chase Claypool, who had a big day for the black and gold. The Steelers led 7-0.

The Eagles would not take long to respond, as Miles Sanders made a few players miss and was off to the races for a 74 yard touchdown right before the first quarter ended. The game was knotted up at 7 through one quarter.

In the second quarter, the Steelers offense continued to roll led by Claypool. On a third and 9, Claypool caught a 15 yard catch and run, then James Conner exploded for a 25 yard gain on the next play. Claypool would cap the drive off with a 32 yard touchdown connection to put the Steelers up 14-7 after a 7 play, 75 yard touchdown drive.

The Eagles would answer again and match them with another touchdown drive capped off by Miles Sanders, who ran it out from one yard out. Carson Wentz picked up two third down conversions with his arm to extend the drive. The game was tied at 14 halfway through the second quarter.

The Steelers got Eric Ebron involved on their next drive, with a big 17 yard connection to get the Steelers past midfield. However, the Steelers drive would stall, and they would settle for three points. The Steelers led 17-14 with just under two minutes left in the half.

The Eagles would give the Steelers defense a scare before the half. Wentz would complete passes on third and 17 and third and 10. However, after completing a deep pass to J.J. Arcega-Whiteside, time would run out and the Steel Curtain would lead 17-14 at half. Roethlisberger threw for over 100 yards on 15 completions.

The second half would begin fast for the Steelers offense after a 58 yard run by Ray Ray McCloud. Two plays later, Roethlisberger would find Claypool for his third total touchdown of the game to put the Steelers up 24-14.

Just two plays into the Eagles first drive of the second half, Carson Wentz would throw an interception that would set the Steelers up in the red zone. Steven Nelson is credited with the interception.

The Steelers would cash in after a defensive pass interference call on the Eagles. James Conner would punch it in from one yard out, and within a matter of minutes go up 31-14.

However, the Eagles would not go away. After getting themselves into third and long early in the drive, Wentz found Travis Fulgham for a 36 yard gain. A defensive pass interference on Joe Haden set them up with a first and goal, and Wentz would find Greg Ward for an eight yard score. They would go for two and succeed, cutting the Steelers lead to 31-22.

After a 36 yard reception by Chase Claypool was reversed, the Steelers could get nothing going on their next drive and had to punt it back to the Eagles.

Wentz continued to make big throws on their ensuing possession, after he connected with Fulgham again for an 18 yard gain. Their drive would span from the closing moments of the third quarter to the early stages of the fourth. Jalen Hurts would make an appearance in the game and complete a pass that got them near the redzone. The drive would be capped off by Wentz throwing another touchdown, this time to Fulgham for a four yard score. The Eagles trimmed the lead to 31-29 early in the fourth quarter.

The Steelers would stick the dagger into the hearts of the Eagles and their fans on their next drive. Claypool would get behind the Eagles defense again and score his fourth touchdown of the day on a 35 yard strike from Big Ben. That touchdown would put the Steelers up 38-29.

That would seal the game, as the Steelers move to 4-0 with their 38-29 victory over the Eagles. Claypool finished with seven receptions, 110 yards, three receiving touchdowns and one rushing touchdown. As a team, they finished with five total sacks, including 1.5 from Stephon Tuitt.

The Steelers host the Browns next week at 1 pm on CBS.