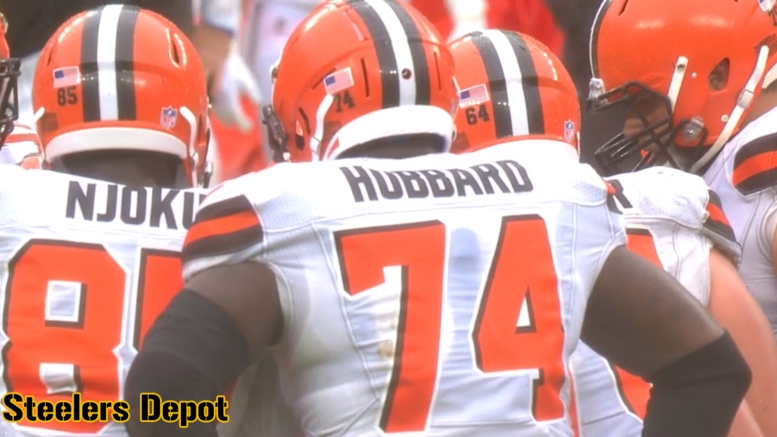 Even with a first-overall pick at quarterback, and a Pro Bowl running back currently on injured reserve, the 4-1 Cleveland Browns are still entering Sunday’s game against the Pittsburgh Steelers understanding the importance of getting the run game going, first and foremost, against one of the top run defenses in the NFL.

And it will be up to a former Steeler to help that along. Chris Hubbard has actually already made a number of starts against his former team at right tackle, but on Sunday, he will be filling in at guard for Wyatt Teller for his first career start inside.

“Oh man, this is going to be fun going into this game”, he told reporters this week. “I think for the most part, the intensity of the game is going to be at an all-time high because we are a different unit this year and we have a different scheme. We are a very hungry team this year. We are very hungry. Those are some of the things that you will see on Sunday”.

He also talked specifically about the challenges of getting the Browns’ lateral run schemes going against the Steelers’ front in particular, a group that he has five years of experiencing practicing against, and two years playing against.

“The tight ends are gonna have to take care of Bud and T.J. when it comes to those wide zone schemes, and as far as the tackles, they better be there to help them and to assist what they can see on the outside to make those big plays that we need”, he said.

“They’re a gap-front team as far as controlling the line. For years, I’ve seen them practice that. I’ve seen it first-hand when I was over there in Pittsburgh. We’re gonna set the edge and make sure we get this wide zone running”.

Hubbard, a former undrafted free agent out of UAB in 2013, spent his rookie season on the practice squad before making the roster the following year. He would ultimately make 10 starts at right tackle over his final two seasons in Pittsburgh, which helped land him a starting job at right tackle in Cleveland.

This offseason, the Browns invested in Jack Conklin to take over Hubbard’s right tackle spot, reducing him to a reserve role, but he has been getting on the field due to injury anyway. He has already started at right tackle, and now is starting at guard in what may be the Browns’ biggest game of the season so far, looking to stay near the top of the AFC North—something they haven’t been able to say since 2014, and that was an outlier.