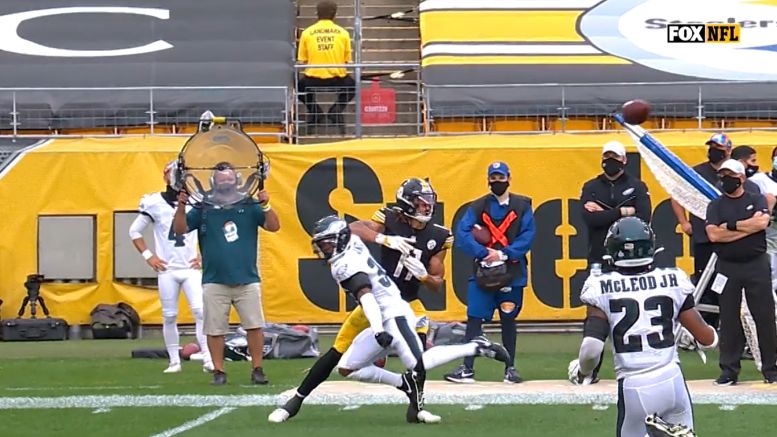 Chase Claypool had an awesome day on the football field today, of that there can be no doubt. It’s not that often that a player is able to score four touchdowns in a single game, let alone four touchdowns from scrimmage. His feat was the first that a member of the Pittsburgh Steelers had done it since Roy Jefferson in 1968.

One wonders, however, if it couldn’t have been five scores, were it not for an offensive holding penalty in the middle of the fourth quarter that negated what would have been a 42-yard touchdown—and which took points off the board, as Eric Ebron lost a fumble two plays later.

Playing in one-on-one coverage against Craig James, who was briefly filling in for an injured Darius Slay, Ben Roethlisberger quickly looked for his hot hand, and it initially appeared as though they struck again, but the officiating crew, which had been by far the most flag-happy of the season, nabbed him for offensive pass interference.

“I thought it was a pretty awful call”, the rookie admitted in speaking to reporters after the game, “but I think the ref knows it, so it’s all good. Things like that happen in the game. The refs are not perfect, and neither are we. You get mad in the situation and then you move on. If it cost us a game or something, I would definitely be a little more upset, but when your number’s called, you make the play, and if the ref misses a call, then that’s that, and you just move on”.

Based on the replay review, there isn’t much there to support the negation of a touchdown. With a back-shoulder throw, Claypool has to work his way back over the top of the defender in coverage, whose forward momentum helps to jostle him forward and tumble to the ground. In live motion, it probably looked worse.

Roethlisberger was visibly frustrated after seeing the review of the play, and the announcing team was not particularly impressed with the call, either. It proved to be a major setback as well, as it put the Steelers in a 2nd-and-22 situation, and as mentioned, they ultimately turned the ball over two plays later.

Of course, Claypool did catch seven other passes for 110 yards and three touchdowns. He nearly had another excellent grab earlier in the game, and the only thing that seemed to prevent him from completing the catch was the fact that the defender’s leg was between his, making it difficult to touch his second foot down before the rest of his body landed out of bounds.