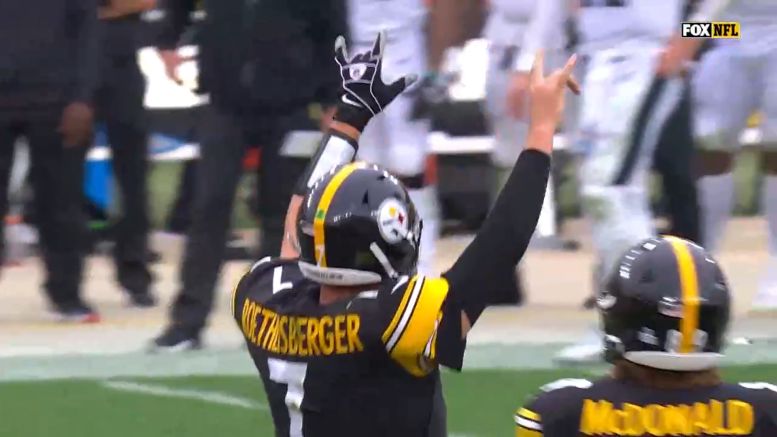 What a difference a couple of weeks can make. Earlier this month, following week four, I covered an article from Pro Football Focus ranking each starting quarterback in the league. At the time, they were not very big fans of the Pittsburgh Steelers’ top arm, Ben Roethlisberger, just three games back from torn tendons in his throwing elbow, ranking him 20th in the league.

“It’s only three games, but we’re seeing an odd, game manager-like style from Roethlisberger, who ranks third from the bottom in positively graded throws but also tied for fourth-best at avoiding turnover-worthy plays”, Steve Palazzolo wrote back on October 7. It’s a different story in late October.

In the site’s latest quarterback rankings, the 38-year-old quarterback has shot up a full 10 spots, now ranked 10th in the league. Still not great, but far better than being in the gray area of the bottom of the middle third and the top of the bottom third. Sam Monson writes:

The return of Roethlisberger hasn’t just been a huge boost to a team that had to endure Mason Rudolph and Devlin Hodges at quarterback in his absence, but it’s been an interesting study in adaptability, as he has returned a different player stylistically than the one that left. Roethlisberger has become more of a facilitator than a big-play machine for this offense, and it’s working. He has the highest passer rating of his career (109.1) so far but also the lowest average depth of target we have seen from him at just 7.2 yards, two full yards per attempt shorter than his career baseline.

Of course, it’s not that much of a stylistic departure. While he was more prolific in 2018, largely because he was passing the ball significantly more frequently—and need I remind you, the Steelers were also just 2-2-1 through five games that year, so were trailing much more frequently—he was still relying more on short passes and yards after the catch then, during his 5000-yard, 34-touchdown season.

That season, he did begin to not only take more deep shots down the field but find more success when he did. He ended up throwing 15 touchdowns on deep passes and, if memory serves, just two interceptions. So far this season, he has thrown four touchdowns on deep passes, including one on Sunday to James Washington, and his lone interception, which has so far been, by far, his biggest mistake of the season, which he hasn’t repeated.

Thanks to a stout defense and a successful running game, the Steelers have not often been in a position in which they have had to put the game in Roethlisberger’s hands this season. He does have one fourth-quarter comeback and game-winning drive, but they also have plenty of kneeldowns. They are nearly running the ball as often as they are throwing it, something that’s hard to fathom with a Roethlisberger-led offense.