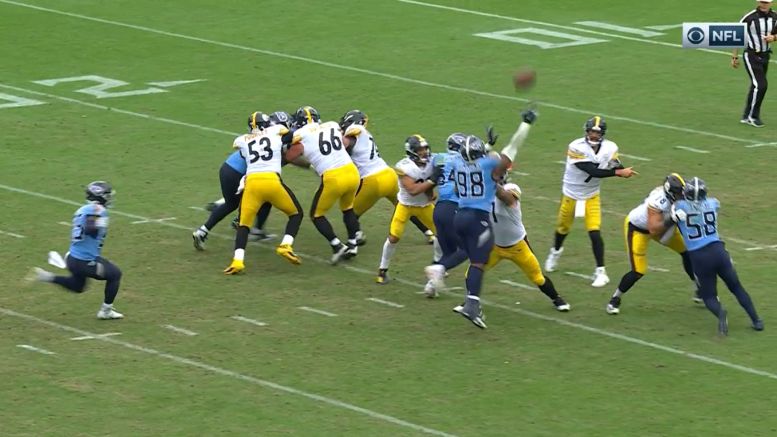 What began as another banner day for Ben Roethlisberger ended with Steelers’ Nation collectively holding their breaths, watching the Tennessee Titans nearly tie the game in its final seconds. One driving reason for that furious comeback were three Roethlisberger picks. Speaking to reporters after the game, Roethlisberger summed up his performance.

“Three interceptions is unacceptable on my part,” he said. “So I need to clean it up and be better.”

Roethlisberger’s final INT was particularly costly. Facing third down up by three and well into field goal range, Roethlisberger’s end zone pass to JuJu Smith-Schuster was tipped and picked. That eventually led to Stephen Gostkowski’s 45 yard attempt to tie it though it thankfully sailed to the right. Roethlisberger was asked about that play.

“And then the last one was, I’ll take Juju down the middle on the linebacker. I gotta get it about six inches higher on the back shoulder. You don’t expect the ball to get tipped up in the air and intercepted. You hope it falls incomplete, but they intercepted it and that’s all me.”

Roethlisberger got a favorable look, Smith-Schuster on linebacker Jayon Brown but the pass was too low and too far in front. Brown tipped the ball and it fell into the hands of safety Amani Hooker.

Here is the INT in the EZ #Steelers pic.twitter.com/Qq2sPDQM1c

Sunday was Roethlisberger’s first three INT game since Week 11 of 2018 which funny enough, also came in a Steelers’ victory. In fact, in the last three games where Roethlisberger has thrown three picks, he hasn’t lost. He’s 2-0-1. The last loss came in 2017 against Jacksonville.

Still, those picks were a crucial reason why the Titans stormed back into the game. And certainly something you don’t want Roethlisberger to repeat going forward. But 6-0 is 6-0 and Roethlisberger is happy with where the team sits.

“It feels good. Obviously you want to be in this spot. You want to have these wins when you can. Obviously a lot of our games have been at home, which you expect to win. But to go on the road twice and to come here to an AFC team that’s undefeated as well and play them. It feels really good.”

Pittsburgh will have a chance to feel even better next Sunday on the road at Baltimore. That will be another tough task and to keep the undefeated streak alive, Roethlisberger must take better care of the ball.