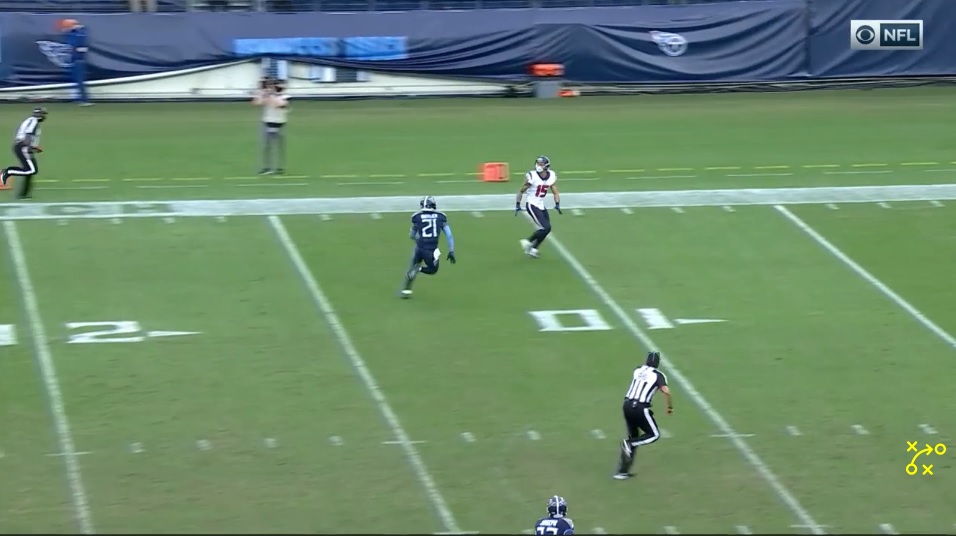 Houston is in 11 personnel with 3 receivers to the left and two split to the right.  Tennessee has their 4 deepest defenders only twelve yards off the ball but will rotate to a Cover 3 look with a matchup Zone underneath.

Houston is in an empty look with running back David Johnson (31) split wide to the left , wide receiver Brandin Cooks (13) in the slot and tight end Darren Fells (87) in the tight slot.  To the right they have Randall Cobb (18) in the slot and Will Fuller (15) split wide right. Tennessee’s nickel defense has Johnathan Joseph (33) as the left corner and Malcolm Butler (21) at right corner. Free safety Kevin Byard (31) is in the left slot and Kenny Vaccaro (24) in the right slot with slot corner Kristian Fulton (26) threatening blitz on the left edge.

At the snap, the Titans rotate into a Cover 3 with the two corners and Vaccaro splitting the deep area into thirds. Houston is going to run a Cover 3 beater sending 4 receivers into the deep area.  The outside receivers both run Go routes, Cooks runs a deep post and Fells runs a shallow post behind the linebacker’s right in the middle of the field.

Quarterback Deshaun Watson (4) is going to read his receivers from right to left. An out route by Cobb takes Byard with him leaving linebackers Rashaad Evans (54) and Harold Landry (58) dropping from the edge into the middle but there is big gap between them. Watson hits the wide open Fells at about 15 yards and he finishes with an 18 yard gain.

Steelers Scenario – From 11 personnel the Steelers don’t put a RB outside often but when they do it’s usually James Conner. From this alignment that would put James Washington in the left slot, Eric Ebron in the tight slot, Juju Smith-Schuster in the slot to the right with Diontae Johnson/Chase Claypool wide right. Ebron would be the recipient on this play.

Houston uses 12 personnel with an I formation using a tight end as the fullback. Tennessee starts out in a 4-3 look before Landry rotates up to the edge making it a 3-4 look with the DB’s and a safety playing Cover 3.

After Fells moves from left to right across the formation Landry rotates up from an off the ball linebacker position up to the line of scrimmage. The Texans have tight end Pharoah Brown (85) in as fullback with Johnson dotting the I. To the left is Fuller and to the right is Cooks both in tight splits.  Safety Vaccaro is going to creep up and come off the edge on the right side of the defense.

Houston is going to use play action and protect with seven.  Fells slides across the formation to pick up Vaccaro with Brown helping block Jadeveon Clowney (99). The play action gets the linebackers to key on Johnson but they really aren’t in the play as it’s a 2 receiver route.  Cooks runs a deep post and picks up double coverage from Joseph and Byard. Fuller runs a shake route often used in the West Coast offense. He’ll angle his route to inside and once he gets to the corner to turn his hips inside he’ll whip around to the outside. The corner Butler has to completely turn his body around leaving an easy throw for Watson about 13 yards down the field and ends with a 17 yard gain.

Steelers Scenario – For the Steelers in 12 personnel Vance McDonald would line up in the backfield as the full back. This could also be run out of 21 personnel with Derek Watt as the fullback and McDonald executing the slide block. The two receivers in most often in 12 are Smith-Schuster and Johnson/Claypool. Juju would run the deep post with Johnson/Claypool on the shake route.

Houston has three WR’s on the field two to the left and one to the right all of them in tight splits. Fells in on the right wing with Johnson in the backfield.  Tennessee has five DB’s on the field and the two corners will rotate to the deep part of the field.

The play is going to start with Cobbs in the left slot running jet motion to the right. Watson is going to put the ball in the belly of Johnson holding Clowney for a beat. Watson will half roll to his right around Clowney. Fuller will come from the tight left slot and run a drag route across the field which Vaccaro will come up and take from the safety position. Cooks from the right slot will run a skinny post drawing attention from Byard and Joseph.

Cobb’s motion will take him under Clowney and into the flat while Fells runs a wheel to outside. This puts linebacker Jayon Brown (55) in a pickle trying to split the difference between the two routes. He leans toward Cobb and with Joseph running with Cooks this leaves Fells wide open down the right sideline for a 35 yard gain.

Steelers Scenario – I would not recommend Ben Roethlisberger trying to out maneuver Clowney. However, the play still could work from the pocket with the wily veteran. JuJu is your motion man and he ends up in the flat, Johnson/Claypool on the drag route and Washington on the skinny post.  Ebron is your wheel man and if the linebacker goes with him the next options would be JuJu and then Johnson/Claypool.