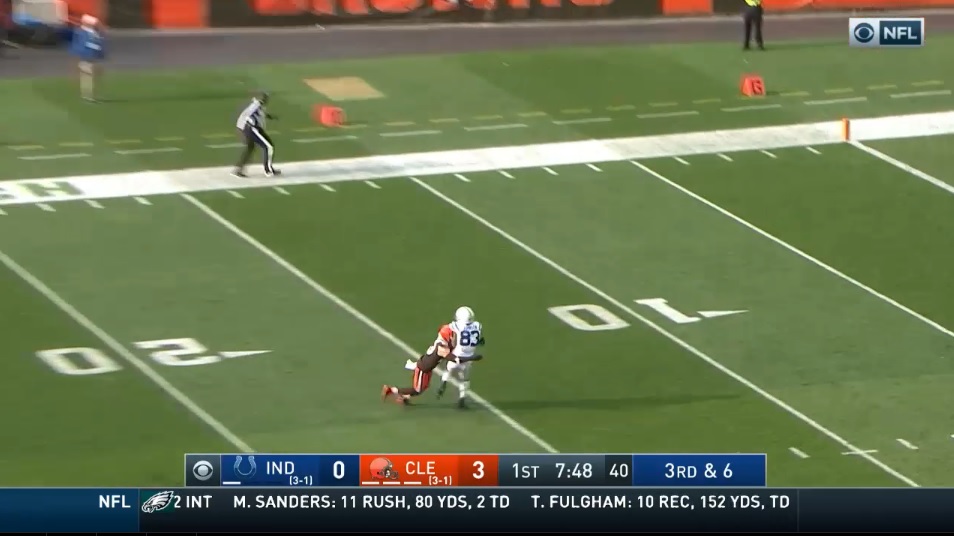 The Colts are in their 11 personal with one receiver to the left and trips to the right with the running back flanking the QB to the left.  The Browns counter with their nickel defense looking like a quarters Zone coverage.

To the left the Colts have Zach Pascal (14) split wide and RB Jonathan Taylor (28) in the backfield. On the right side from the inside out they have WR Marcus Johnson (83) in the tight slot, tight end Jack Doyle (84) to his right on the line of scrimmage and T.Y. Hilton (13) on the outside. The Cleveland defense has DB Terrance Mitchell (39) in a Press look against Pascal and on the other side Denzel Ward (21) is on the outside and Kevin Johnson (28) over the TE. The safeties are Ronnie Harrison (33) to the wide side and Andrew Sendejo (23) opposite him.

Pascal is going to run a deep come back route and is tightly covered by Mitchell. Doyle runs a short Curl between Johnson and linebacker B.J. Goodson (93). From the outside Hilton will run Dig route and on the inside Johnson runs a Post. Goodson attempts to jam Johnson going by but misses him. These two routes are designed to make the safety to that side make a decision. He should stay with the deep Post but he jumps the Dig leaving Johnson running free. Quarterback Philip Rivers uses his eyes to hold Sendejo to the left side before throwing behind him to the middle. The ball is a little underthrown but still good for 36 yard gain.

Steelers Scenario – With Diontae Johnson out this week Claypool with likely be the X so he’ll run the Pascal route.  Ebron runs the TE Curl with James Washington on the outside running the Dig.  That puts JuJu Smith-Schuster in the slot running the Post.

Both teams are in their same personnel with a similar alignment by the Colts. This time the Colts and Doyle split alone to the left side with RB Nyheim Hines (21) in the backfield to the left of Rivers.  To the right from inside to outside they have WR Ashton Dulin (16) in the tight slot, Pascal in the slot and Hilton wide ride. The Browns are in a Cover 3 this time with the two corners and Sendejo splitting the deep portion of the field in thirds.

To the left Doyle again will run a Curl route and draw two defenders while Hines runs a Wheel route.  This looks to be Rivers first read but with veteran LB Malcolm Smith (56) headed toward Hines he works back to the middle of the field. To the right side Hilton runs the short In route, Pascal with the Dig behind the linebackers and Dulin with the Post. Again Goodson attempts to jam but it’s not enough so slow Dulin. Sendejo is shaded to the side with three receivers and is in the same predicament as Harrison was in the last play. He chooses the correct route to stay with but with him shaded that way Rivers is able to throw the ball away from him to Dulin for a 34 yard gain.

Steelers Scenario – In this scenario with the Wheel looking like the first option you want the best speed out there so Anthony McFarland will be the back. It would likely be Washington on the outside, Smith-Schuster running the Dig route and Claypool on the Post

The Browns are once again in Nickel coverage and are playing Cover 3.  The Colts are in 11 personnel with two receivers to the left and two to the right. The running back again flanks the QB to the left.

To the left Indianapolis has Doyle in tight on the line of scrimmage and Johnson outside of him. Pascal is in the slot to the right with Hilton split wide right. Hines is the running back and will again run the wheel this time taking Goodson with him clearing a linebacker out of the middle of the field.  To the right Hilton runs a deep route and is blanketed by Ward.

The key routes are in the middle with Doyle running a deep Slant drawing Smith in Man coverage. The safety Sheldrick Redwine (29) is going to jump the shallow Cross of Pascal coming from the other side of the field.  With Goodson, Redwine and Smith running with receivers in Man coverage the middle of the field is wide open.  Johnson runs a curl in the middle and K. Johnson and Sendejo are too far away to impact the play leaving him wide open. Rivers looks like he reading from left to right so it’s the Wheel first and then the shallow cross before hitting Johnson over the middle for a 13 yard gain.

Steelers Scenario – In this play Claypool is wide right drawing the attention of Ward, JuJu in the slot running the shallow Cross intersecting with Ebron on the deep slant leaving Washington to run the Curl to the middle for the catch. Attacking the safeties is where the Steelers should have the most success this week.