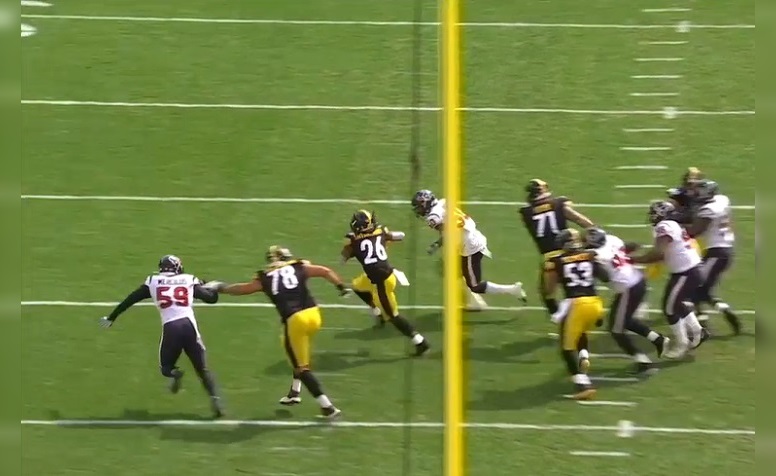 Anthony McFarland showed well for his first-ever NFL touches. Outside of the dropped pass that he had right before breaking off a 20-yard run, and perhaps better execution on his third-and-short rushing attempt, there was a lot to like about the Pittsburgh Steelers’ newest back.

The rookie out of Maryland admitted that he has gotten a lot of positive feedback about the way he performed on Sunday against the Houston Texans in the 10 snaps in which he played, on eight of which he either touched the ball or was targeted, but he’s less concerned about the reviews than about focusing on the next opportunity.

“This is just game one for me”, he told members of the media earlier this week in speaking after his first action at the NFL level. “I know a lot of the guys told me I had a good debut. That felt good. In the back of my head I still have to keep my head down and know that it is just one game”.

On Tuesday, head coach Mike Tomlin made it pretty clear what he thought about McFarland and his trajectory after witnessing the workload that he received in his first action. “He has merited more playing time”, he said, and also made it clear that, although he didn’t get on the field in the first two games, that had nothing to do with how they felt about his readiness to contribute.

“He’s had some really good practices”, Tomlin continued. “This is a difficult environment for young guys to establish themselves and get the type of feel that you’re willing to play them and play them a lot without preseason games and so forth. The process might be a little bit more cumbersome for him. And he’s continually worked hard and earned the opportunity that he got. And I’m sure we’re going to continue down that road with he and others”.

McFarland waws a healthy scratch for the first game of the season, behind James Conner, Benny Snell, and Jaylen Samuels at running back. Though active in week two against the Denver Broncos, he did not get on the field, with Tomlin saying earlier this week that the game situation just didn’t develop to introduce that package.

On Sunday, however, he was on the field for the second snap of the game, one of just two snaps he played in which he was not designed to touch the ball, though he was used as a motion man before the snap.

“I didn’t know how many carries I would get”, he admitted, finishing with six for 42 yards, and one reception for seven yards. “I was thinking in my head even if I get two, or one, I was going to be happy about that, for the opportunity. I was just trying to seize the opportunities I got”.

I don’t know that he’s going to get 6-10 touches every game, but Tomlin was pretty clear in expressing the idea that he is a part of their offense and that their intention is to utilize his skill set.