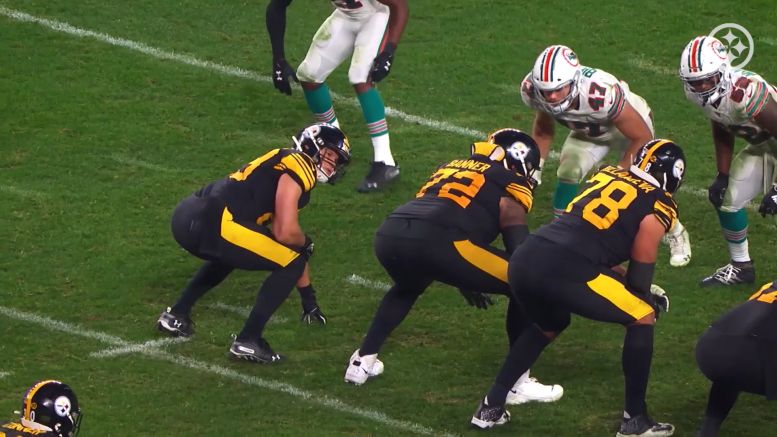 That’s 99% good news if you’re Banner. The only tiny downside is that he won’t be in play to catch a pass this season. Banner was asked how he’s accepting that reality in a Thursday Zoom call with local reporters. Banner made a sad face when asked the question but happily accepts his new role as a starter.

I really am [joking about no longer playing tackle eligible],” he said. “Whatever it takes to help the team, that’s really just my mindset. Even when I was at jumbo tight end as, that’s why I put so much passion into it. I need that same passion to carry over what I’m doing now. Because the bottom line, we can all celebrate and congrats on all this stuff now, but I go out on Monday night and I suck, I’m done. That’s just the bottom line. I want to get to the Monday night first. I want to play first. I want to put actions on tape.”

Banner will be making the first start of his NFL career at right tackle and his first regular season snaps there in a Steelers’ uniform. The last time he started at tackle in a meaningful game came in the 2016 Rose Bowl, a 52-49 shootout win over Penn State. Banner started at left tackle that game.

It’s a long time coming for the former 4th round pick, as Matthew Marczi wrote about yesterday. Signed by the Steelers two days before camp ended in 2018, he’s worked his way up the ladder. Banner was won essentially every battle he’s been apart of since becoming a Steeler. Making the roster in ’18, beating out Chukwuma Okorafor for 6th offensive linemen duties in 2019, and again for the right tackle gig in 2020. Now he’ll get to play under the primetime lights Monday night versus the Giants.

Though Banner has experience on Sunday’s, playing tackle is a little different than being the tight end, even if it’s just sliding one spot inside.

“It’s a different position. You guys have to understand when you’re at the jumbo side you’re thinking like a tight end. but also a tackle. Because you have to kind of use a lot of the footwork and the technique, but the assignment you are a tight end. So it’s really, really different.”

He’ll be in pass protection much more often than he was as the 6th tight end. Banner pass protected on just 15.9% of his snaps a year ago. That number will skyrocket now that he’s the starting tackle.

Steelers’ Nation shouldn’t abandon all hope for Banner’s receiving chance. All the team has to do is dial up another fake field goal as they did for Alejandro Villanueva two years ago.