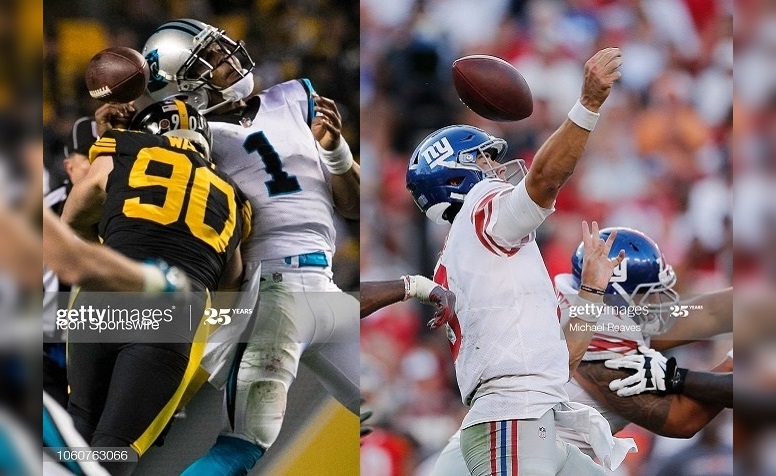 Are you ready for some Pittsburgh Steelers football Monday night? I bet Steelers outside linebacker T.J. Watt is and it’s because he’ll get a chance to get after New York Giants quarterback Daniel Jones, who was miserable at protecting the football throughout his 2019 rookie season.

QBs with most fumbles last season listed below. Daniel Jones leads the list. Carson Wentz is second. The Steelers and T.J. Watt play both of those teams in the first five games. Steelers also play the Bills & Jaguars in 2020. #Steelers pic.twitter.com/q1Dg92Uloy

As you can see in the several game clips below, Jones had quite the issues holding on to the football as a rookie and especially on sack attempts. It’s no secret he needs to make drastic improvements with his ball security in his second season and it’s something the new coaching staff of the Giants have emphasized this offseason.

“Ball security is a huge thing that Coach [Joe] Judge preaches, that Jason [Garrett] preaches, that we preach,” new Giants quarterbacks coach Jerry Schuplinski said during the team’s training camp. “Just really understanding the importance of all that stuff, why that’s important. Also understanding defenses, what that means. Is there certain tips or cues that we can pick up to helps play better, quicker, faster.”

While ball security has been a focus for Jones this offseason, he hasn’t had much of an opportunity to practice it since last season ended due to coronavirus pandemic wiping out most of the NFL offseason. As the August story by Michael Eisen of giants.com goes, in a normal year, Schuplinski would have introduced drills to Jones in the spring workouts to help the young quarterback learn and practice better ball security. Instead, all of Jones’ offseason instruction prior to training camp getting underway was done virtually. That’s obviously not ideal.

Jones will also have two new tackles protecting him 2020 with Cameron Fleming getting the nod at right tackle, which means he’ll be responsible for pass protecting against Watt most of Monday night. Last season, Fleming’s pass protection was just mediocre overall in the 154 total pass plays he was asked to do so as a member of the Dallas Cowboys. Most of those snaps also came at left tackle as Fleming only logged 12 total snaps at right tackle last season. He allowed 2 sacks, 3 hits and 8 hurries last season, according to Pro Football Focus.

Will the Giants scheme to give Fleming some help against Watt Monday night? Probably, but it’s not like they’re going to be able to do that throughout most of the game. In short, expect Watt to have quite a few one-on-one opportunities against Fleming Monday night and if Jones winds up having to hold on to the ball long several times throughout the game, there’s a good chance that Watt will get an opportunity or three to test the young quarterbacks ball security improvements, or lack thereof.

Another fumble by Daniel Jones last season. Second one of this game and third on the season. He had 18 in total in 2019. #Steelers pic.twitter.com/w0Gt2a6CM2

And…. another Daniel Jones fumble from 2019 #Steelers pic.twitter.com/4Z10RUhNB1

And another one… embarrassing #Steelers pic.twitter.com/z9bsKBNXBs