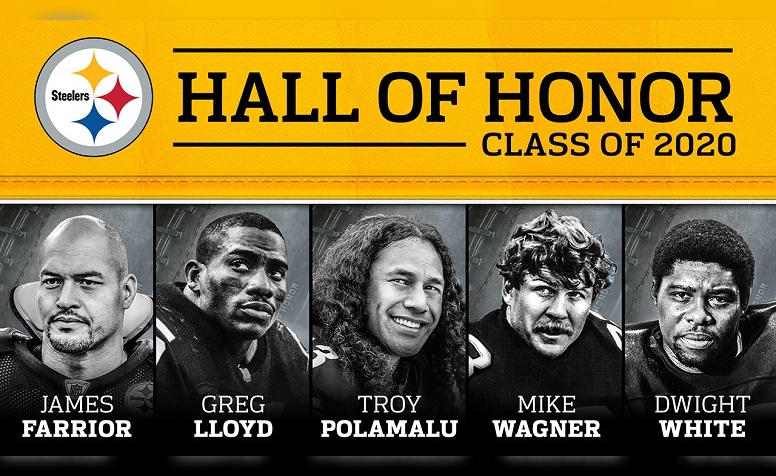 Pittsburgh traded up in the 2003 draft to select Troy Polamalu 16th overall out of USC. One of the most dynamic players of his era, Polamalu was an eight-time Pro Bowler, four-time All-Pro, and two-time Super Bowl champ. He was a Steeler his entire NFL career, 2003-2014, starting 142 games, picking off 32 passes and recording 14 forced fumbles. He had the game-sealing pick six in the 2008 AFC Championship game, sending the team to the Super Bowl where they’d defeat the Cardinals and capture their 6th Lombardi. Polamalu was selected to the Hall of Fame this past year.

White made up one-fourth of the Steel Curtain defensive line. Drafted in the 4th round of the 1971 draft, White was a two-time Pro Bowler and four-time Super Bowl champ. He famously played in Super Bowl IX despite battling pneumonia, helping Pittsburgh beat Minnesota 16-6. White tackled QB Fran Tarkenton in the end zone for the team’s first points in Super Bowl history. He made 104 starts for the Steelers from 1971 to 1980.

Farrior was one of Kevin Colbert’s best free agent signings, brought over from the New York Jets for the 2002 season. He became a standout in the middle of some great Steelers’ defenses, spending the next ten years in black and gold. In Pittsburgh, he made two Pro Bowls, won two Super Bowls, and racked up over 1000 tackles and eight interceptions.

Like White, Wagner was selected in the 1971 draft, taken in the 11th round. A two-time Pro Bowler and four-time Super Bowl winner, he made 119 starts for the Steelers from 1971-1980, picking off 36 passes, including a league-leading eight in 1973. He’s remained local since his playing days ended, coaching high school teams in the area before becoming Vice President of First National Bank.

Lloyd was known as one of the fiercest pass rushers in team history, playing for the Steelers from 1988 to 1997. In ten years with the team, he recorded 54.5 sacks, including ten of them in 1994. He was a five-time Pro Bowler and two-time All-Pro. Not bad for a 6th round pick out of Fort Valley State.

During the reveal, Team President Art Rooney II remarked the fact all five inductees were defenders.

“I think over the years, we’ve become known as a team, a franchise, that’s always put strong defenses on the field,” Rooney told host Stan Savran. “Certainly some of the most significant players on the field have been defensive players. I guess that’s as it should be as Steelers’ football has evolved.”

Rooney said he hopes this class can be inducted later in the season if and when fans are allowed to attend home games. In past seasons, the class has been honored during halftime of a game at Heinz Field.

With these inductions, there are now 41 members of the Steelers’ Hall of Honor. The Hall was established in 2017.

Some of the best to ever put on the Black & Gold. #HallofHonor pic.twitter.com/MAUB7aRVe2