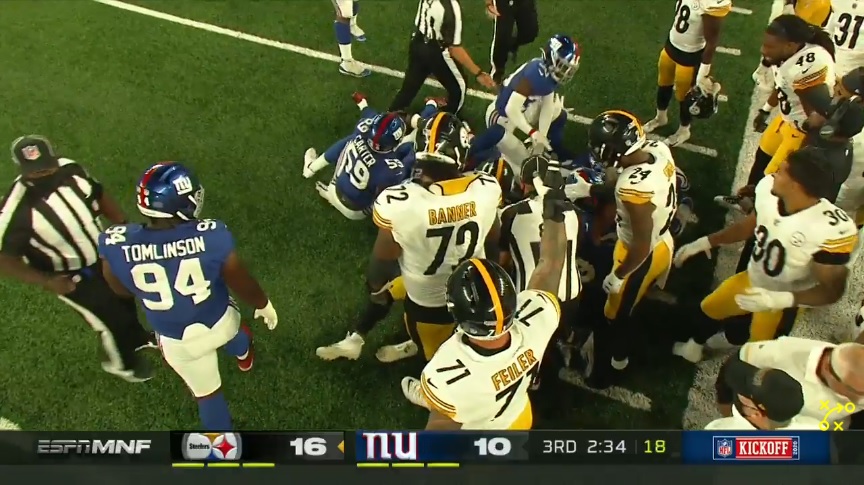 1. Old Face in a New Place – For a guy who has never played nose tackle position it didn’t seem to bother Tyson Alualu. He was playing against a player relatively new to playing center but that’s not his problem.  He was in the Giants backfield early and often and was disruptive throughout the game. He finished with four tackles, two for a loss and a QB hit.  Since coming to Pittsburgh the former first round pick has done whatever they team has asked and last year he played well in place of Tuitt and now at a new position.  Team player.

2. You get a TFL and You get a TFL – Another early and often trend was the defense coming up with tackles for a loss. It started with Vince Williams with a nice run fill early in the first and he finished with 3 total. Then Ola Adeniyi tossing aside the TE to get one. Bud Dupree had a couple along with Alualu. In total the defense made eleven tackles behind the line of scrimmage and held Saquon Barkley to just 6 yards rushing.  Impressive start to the year for the run defense.

3. Special Teams need a Preseason – This portion of the game was ugly. Starting with Diontae Johnson letting a punt bounce of his chest.  They allowed the Giants punt returner to avoid the first man and average 13 yards per return.  Chris Boswell doinked an extra point and then hit a kick off out of bounds.  Luckily there was no major damage from these issues and its only game one but you don’t want to see these issues going forward.

4. Long to Short – The early passing game was a mess. It seemed like all of the passing plays were very slow to develop with deep drops from the QB.  Working with new group on the offensive line and the deep drops were not a good combination. It was good to see Ben get into the 2 minute drill and start using a quicker, shorter passing game and they stuck with that the rest of the way.

5. Conner’s Number Dialed Often – The Steelers have been known to use their starting running back as much as possible during the last year of the contract but it seemed a bit excessive today. I believe Conner had a touch or a target on 8 of 13 plays in the first quarter and 10 of the first 15 plays overall. If that was the game plan it wasn’t good. If that is how Randy Fichtner reacted to the flow the game it wasn’t good.  Poor blocking and a poor passing game early on was difficult to watch.

6. Benny’s Big Day – Even before James Conner got injured Benny Snell looked like the better back. He seemed quicker and ran with power behind his pads. Many fans have complained about him over the last year saying with wasn’t fast enough or good enough to hand the lead back role.  I think he showed last year and in this game that he is plenty good enough as he set a new career high topping the one hundred yard mark and averaged 5.9 per carry against a good defensive line.  He also had a nice blitz pickup on the first TD to JuJu Smith-Schuster. The fumble was a blemish but over all a good day.

7. Be Aggressive, B-E Aggressive – In the second quarter defensive coordinator Keith Butler turned the intensity up to eleven. He brought pressure and brought it from everywhere.  There was a lot or creativity and deception in his game plan. Six different players were credited with QB hits and I’m shocked it was that low.  He brought linebackers. He brought safeties. He brought corners.  He had Heyward shift to the left end putting him and Tuitt on the same side.  I loved it.

8. Effort On Fumbles – I wanted to give some credit to two players on fumbles. The first was Jaylen Samuels on Johnsons fumble. The Giants had 5 guys around the ball and Samuels dove into the pile. He didn’t come up with it but he may have prevented the Giants from recovering in the end zone. And JuJu on Snell’s fumble was effort and quick thinking to get in there when again the Giants had a crowd around the ball.

9. Rookies Getting a Taste – Very happy with the performances of the rookies in week one. Chase Claypool had 3 touches for 47 yards including a beautiful toe tapping catch and a first down run where he stayed inbounds to keep the clock running. Alex Highsmith got his first tackle of the year and was seen chasing the QB out of the pocket a couple of times.  Kevin Dotson came in late in the game after an injury and handled himself well. He had a nice rep on the second TD to JuJu and plowed the road pulling on a later Snell run.  A small sampling for each but all did well.

10. Injured OL’s – Injuries happen. Every team has to deal with them but two plays late in the game were particularly hard to see. First Stefen Wisniewski had to come out after a pectoral injury and the next play Zach Banner went down with a knee injury. Wisniewski was so excited to be back home and starting for the hometown team and Banner has worked his tail off to drop a ton of weight and truly earn not only a spot on team but the starting position.  I hope the injuries aren’t as serious as they sound but I can’t help but feel gutted for those guys.