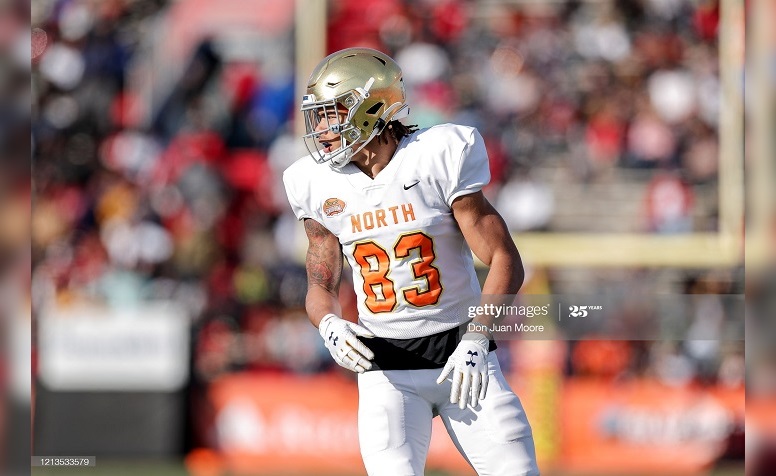 Pittsburgh Steelers rookie wide receiver Chase Claypool has been very impressive in his first wo NFL games as the team’s first draft selection this year out of Notre Dame has already registered five receptions for 127 yards and a touchdown in just 43 offensive snaps played. If that’s not enough, Claypool has already made a significant mark on special teams with three total tackles in 28 snaps played. On the heels of Claypool’s great showing on Sunday against the Denver Broncos, Steelers head coach Mike Tomlin was asked to comment on what he saw in Claypool, not just a receiver, but as a special teams player as well prior to the team drafting him this year.

“I think it started for Kevin [Colbert] and I personally in Mobile [at the Senior Bowl],” Tomlin said. “We have an opportunity to go to practices in Mobile, and you know how we covet those opportunities to get down on the field and get close to the draft class and watch them work and receive instruction. We were just really impressed with him as a football player no matter what was going on down there.

“Whether it was special teams drills and he was playing gunner or what have you or blocking drills where he was competing against DBs, he just showed the type of football character that we covet. A guy that is a competitor in all circumstances and obviously we like his wide receiver talents. I think it started there for us.”

If you remember back, it seemingly did indeed start at the Senior Bowl when it comes to the Steelers and Claypool. Daniel Valente, who was in Mobile again this year covering the annual college all-star game for the site, reported while in Mobile that Claypool had said the Steelers were trying to meet with him those few days he was in town. That meeting obviously took place at some point.

It’s unknown if the Steelers wound up having a formal meeting with Claypool while in Indianapolis, IN for the annual scouting combine. Regardless, Claypool put on a showing at the combine and it was highlighted by him running his 40-yard-dash in 4.42-seconds after measuring in at the event at 6042, 238-pounds. Claypool also registered a 40.5-inch vertical jump at the combine as well. He is now the only wide receiver over 230 pounds to break a 4.45-second 40-yard-dash time since Calvin Johnson accomplished the feat in 2007.

Even though Claypool didn’t have the luxury of having minicamp or OTA practices this offseason due to the pandemic, he still reportedly managed to turn heads quite frequently during training camp. Him doing so is what likely led to him already averaging a little more than 20 offensive snaps played per game in the Steelers 2-0 start to the season. After Sunday’s game, he credited being able to get the playbook during the team’s virtual minicamps as being a main reason why he was so prepared for training camp despite never practicing with his new team beforehand.

“Yeah, I think it was honestly super helpful that we were able to get to the playbook in that virtual minicamp thing, Claypool said on Sunday. “And then so I would get the plays and run through them on the field with one of my coaches back home. And I think that kind of helped me visualize things. So, I would just get the install and run through it on the field and try to get that to stick.”

Stick it has indeed and Claypool will likely be sticking several more catches and special teams tackles throughout the remainder of his rookie season.