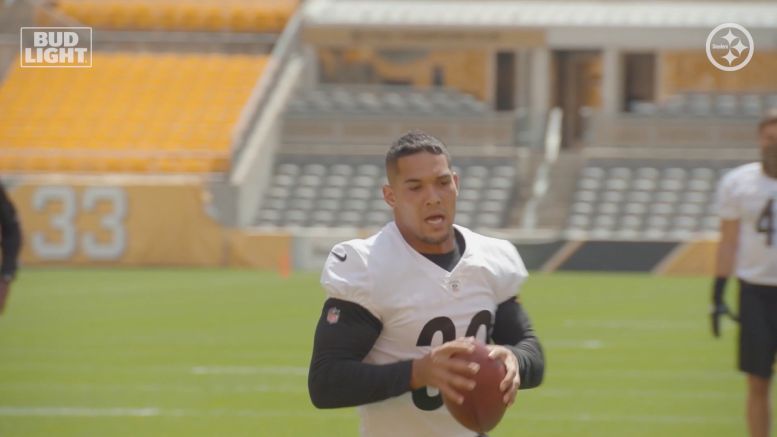 In addition to newcomer fullback Derek Watt, the Pittsburgh Steelers will open their 2020 season with four running backs on their active 53-man roster. That group of four players includes James Conner, Benny Snell Jr., Jaylen Samuels, and rookie Anthony McFarland Jr. As a group, those four running backs are diverse. On Tuesday, Steelers head coach Mike Tomlin was asked about that diverse group of running backs the team has and what he envisions the division of labor being with it to start the season. He was also asked if he’ll ride with just one main running back.

“You know, we’re going to discover that week in and week out in terms of what gives us the very best chance to win each and every game,” Tomlin said. “We have players with unique and different talents, particularly at that position, as you mentioned, and we’re not opposed to utilizing all of those talents. All of that being said, there is no question about who our bell cow is, our bell cow is James Conner, and he’s our primary ball toter.”

Tomlins response to that question wasn’t a bit surprising. After all, he’s said all offseason that Conner will be the team’s featured running back in 2020. Assuming Conner stays healthy, something he’s had problems doing since entering the NFL in 2017, there’s no reason to believe that he won’t receive the heaviest amount of work week to week.

The hope is that Conner’s injuries in the NFL to date, which general manager Kevin Colbert has described several times this past offseason as being acute, won’t resurface in 2020. If he stays healthy, there’s a good chance the University of Pittsburgh product has a 2020 season similar to, if not better than, the one he had in 2018. Conner, who is currently in the final year of his rookie contract, certainly needs 2020 to be his best season ever as well.

Starting Monday night in the team’s opener against the Giants, it will be interesting to see how much work Conner gets in that contest and if Snell and or Samuels ultimately relieve him for a series or two at various points. Snell reportedly had a particularly good training camp, according to Tomlin, and the expectations are for him to have a very good second season in 2020.