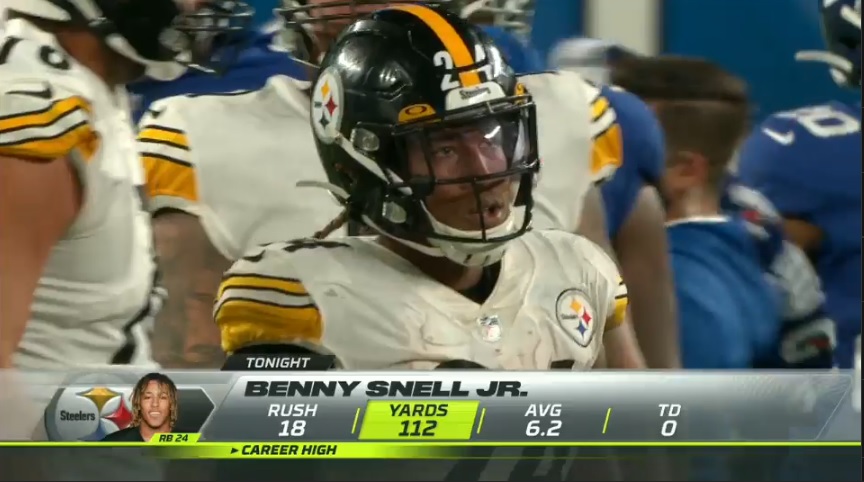 Benny Snell Football was certainly on display Monday night. Snell notched the first 100+ yard game of his NFL career, leading the Steelers’ rushing attack that was stagnant – if I’m being kind – before he took over for James Conner. Snell finished the game with 19 carries for 113 yards, a healthy 5.9 yard average, including a 30 yard run late in the game to seal victory.

Mike Tomlin praised the performance after the game but didn’t seem surprised by it one bit.

“We talk openly about the maturation process,” he told reporters virtually. “The things you can expect from a second-year player. He’s showed signs of that from the very beginning of this team development process. We talked about it openly in this setting. So I wasn’t surprised by what he was able to do. He’s a quality player, one whose maturing and emerging and was ready to answer the bell when called upon.”

Snell showed a better understanding and competency in pass pro last year, though he predictably had his rookie struggles, and seems to have improved his game overall heading into Year Two. Pittsburgh showed no hesitation in asking him to pass protect. That’s even more important now that Conner is dealing with an ankle injury. Jaylen Samuels is a poor pass protector while Anthony McFarland is a rookie who didn’t show much of that on tape at Maryland.

Snell had the door opened for him to be “the guy” in the backfield. Literally, he ran with it. Snell showed burst, power, and jump-started the run game after it struggled early on. He’s proven to be a reliable, downhill runner since the team took him in the 4th round of the 2019 draft.

On a short week playing this Sunday in Denver, odds are good Snell will get the start and aim for back-to-back 100 yard games.

#LIVE: Coach Tomlin addresses the media following our win over the Giants.@UPMC https://t.co/rgoU6jD0o5