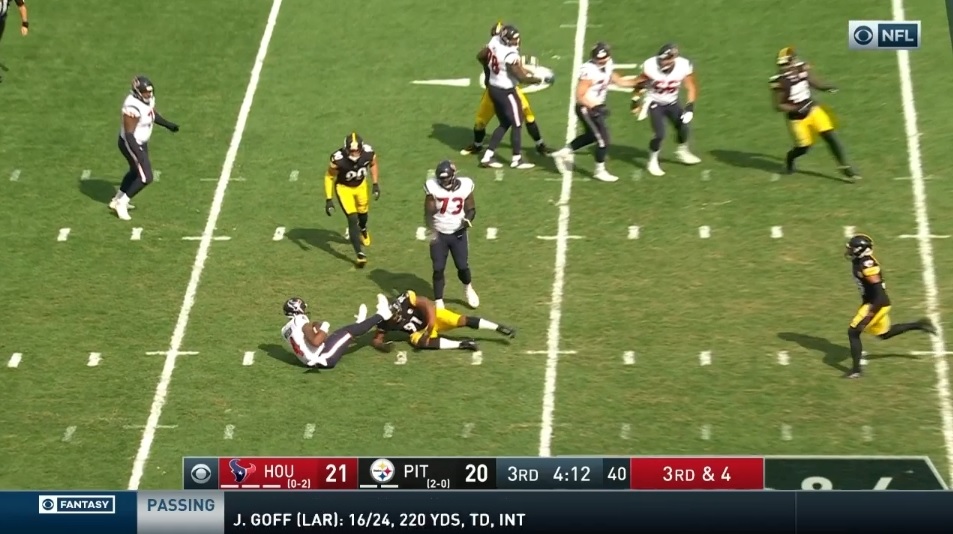 Deshaun Watson looked like an All-Pro in the first half. The Pittsburgh Steelers made sure not to make him look like that All-Pro for a full 60 minutes. The Steelers’ defense did a much better job containing him in the second half and pitched a shutout in a 28-21, come from behind victory. Following the Week 3 win, Mike Tomlin explained how they slowed Watson and the Texans’ offense down after halftime.

“We mixed some things up with our coverages,” Tomlin told reporters. “We rushed a little bit differently. He was finding escape lanes not to necessarily in an effort to run but in an effort to buy time and break some of our zone coverages down and find open spaces. We made minor technical adjustments to both the rush and the coverage. And I think that was the difference.”

Watson torched the Steelers in the first half, carving up the secondary to the tune of 14 completions on 18 attempts, 202 yards, two touchdowns, and no interceptions. The second half was a totally different story, Watson going just 5/9 for 62 yards, no touchdowns, and an interception. Above all, the Steelers possessed the football, having the ball for nearly 12 of the final 13:30.

Normally a man-heavy defense, the Steelers leaned on more zone concepts in an effort to keep Watson from making plays with his legs. Watson ran the ball only once for five yards.

“You play man to man against this guy on possession downs he could run for 100 yards himself on you. And so we just thought with guys having vision to break, it could help the rush if he was able to escape. And it benefitted us some today but that’s just the method that we chose today. He’s got special talents. He presents unique challenges. We did what we had to do to win the game.”

Pittsburgh got a key turnover in the second half, Mike Hilton jumping a cross-body throw on 3rd down. It was Hilton’s first INT of the season and the only turnover for either side the entire game.