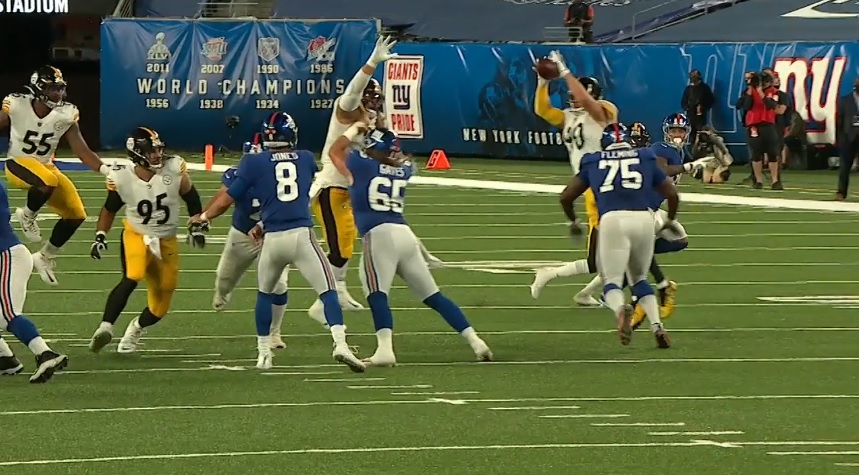 TJ Watt didn’t record a sack in Monday night’s opener. But like a true MVP candidate, he found ways to make an impact. Watt made the Pittsburgh Steelers first significant defensive play of the night, leaping up to intercept Daniel Jones in the 2nd quarter. Talking to reporters after the team’s 26-16 victory, Watt broke down the play.

“Yeah, it was a tight end/DT look,” Watt said in a virtual Q&A after the opener. “So it was a tight end, wing set. I was flat footed trying to play the run. And as I was transitioning to my pass rush, I saw the quarterback kind of looking my way. So I kinda dropped back instead of rushing and the ball came my way and picked it off.”

Check it out yourself.

Told ya he meant business 😏

Like the best playmakers, Watt had the instincts to feel what the play was going to be and abandoned his assignment in order to make the play. Watt read the quick, three step drop by Jones, knew he wasn’t going to get the quarterback if he kept rushing upfield, and got in the throwing lane instead. That’s why the Steelers will back the money truck to his door next summer.

It was one of the game’s early key moments. At the time, Pittsburgh trailed 10-3. The pick gave the ball back to Ben Roethlisberger who found JuJu Smith-Schuster on a ten yard touchdown five plays later. Chris Boswell doinked the extra point, failing to tie the game, but it got the Steelers on the board and in the end zone.

It was Watt’s fourth career INT since getting drafted 30th overall in 2016. Watt picked off a pair last season, showing a complete game – rush and cover – on way to an MVP-worthy season. Though he didn’t record a sack against the Giants, he got plenty of pressure, was part of a run defense that held Saquon Barkley to less than one yard per carry, and showed why he’s one of football’s most dominant defenders.

Watt finished the game with one tackle for a loss, two pass deflections, and that important pick. He and Bud Dupree reminded the Giants, and anyone watching the game, that they’re among the most dangerous duos in football.