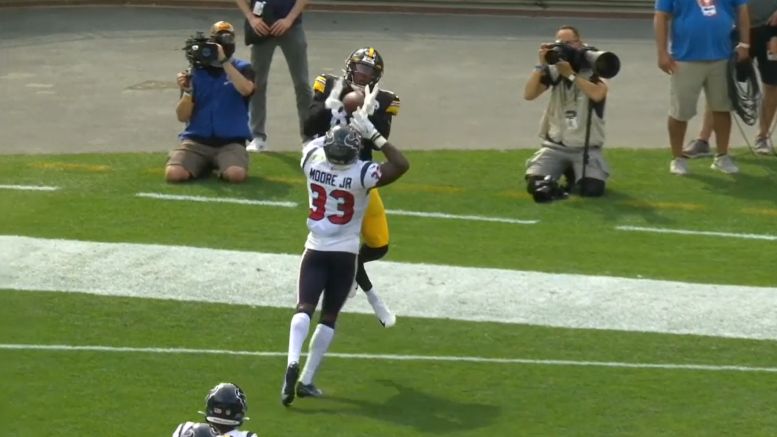 The media was getting impatient with the Pittsburgh Steelers. They gave Eric Ebron a two-year, $12 million contract in March, but through the first two weeks, he hadn’t done much—just four catches for 61 yards, even if a couple of those catches had held some importance in their victories.

Seemingly everybody they could think to ask last week was asked about using Ebron more. Mike Tomlin. Ben Roethlisberger. Randy Fichtner. Ebron himself. The general message? Be patient. Keep watching. Well we started to see that patience pay off early on Sunday against the Houston Texans, as it didn’t take the Steelers long to get Ebron involved early.

He was the target of the first two passes of the game, even if they weren’t successful. The first target was a bust because Roethlisberger had to double clutch the ball, and he threw it behind Ebron. The success came later. He had two catches on the first scoring drive, including an 11-yard touchdown grab on a great play, just the sort of play everyone was hoping for when they signed him.

And it was a third-down conversion to boot, which had suddenly become hard to come by, so that never hurts, either. In fact, it was 2nd-and-goal from the one before Roethlisberger was flagged for intentional grounding on the previous play.

Though his contributions became quiet in the third quarter, Roethlisberger started going back to him in the final frame, including two quick passes on their first drive of the quarter. On third and four, they connected for a 19-yard gain down the field for a critical conversion just after the defense secured its first turnover of the game.

In all, Ebron finished the game with five receptions for 52 yards and his first touchdown in the black and gold on seven targets, with the two incompletions coming on the first two plays of the game, both on at least somewhat errant passes by Roethlisberger.

It’s clear that the relationship between the two is beginning to percolate, and that there is an exciting future awaiting the duo. His targets and productivity have now gone up in each game, totaling nine receptions for 113 yards and a touchdown.

That’s well in-line for a very solid season if that continues. At the moment, he is averaging three receptions per game for 38 yards. Over a full season, that would translate to 38 catches for over 600 yards and five or six touchdowns.

And keep in mind, he is seeing an upward trajectory, a very predictable one as well considering the lack of an offseason and the need for time to establish not just a rhythm with his quarterback but also a place in the offense.

After showing what he can do in the end zone with that great third-down touchdown, you know he’s going to keep coming back to Ebron. While he’s not likely to hit double-digit scores, don’t be surprised if he puts up numbers similar to his 66 for 750 that he had with Andrew Luck.