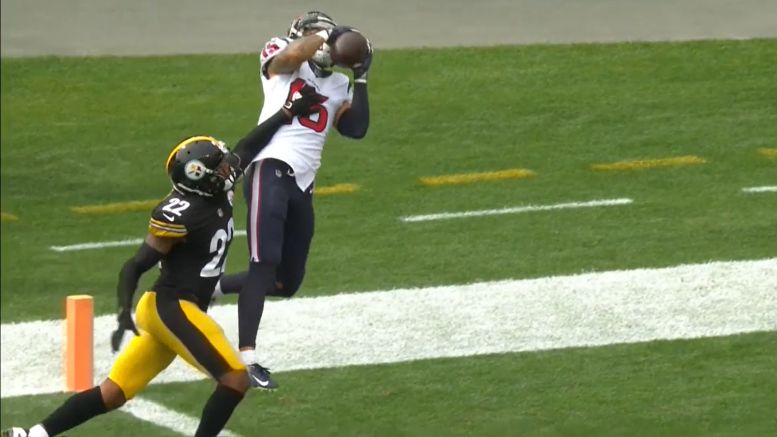 One thing that was pretty much immediately obvious coming out from today’s game is the fact that the Pittsburgh Steelers were not playing a cupcake team. Even with the Houston Texans sitting at 0-2 following losses to the Baltimore Ravens and the Kansas City Chiefs, anybody paying attention should have known that they still have Deshaun Watson, one of the best young quarterbacks in the NFL.

And he was dealing throughout the afternoon against a Steelers secondary that garnered the reputation last season of being one of the best in the league. Watson put up three touchdown drives through the first half, including an explosive-play touchdown against Mike Hilton to Randall Cobb and then, to end the first half, a one-on-one win over Steven Nelson to Will Fuller to take back the lead.

By halftime, he had only thrown four incompletions on 18 pass attempts, posing 202 yards and the two touchdowns, with the third touchdown coming on a walk-in run by David Johnson, the first rushing touchdown the defense has allowed on the season.

While they also allowed yards against Daniel Jones of the New York Giants and then Jeff Driskel last week after taking out Drew Lock against the Denver Broncos, Watson looked much more dangerous while throwing the ball around. More decisive. More accurate. Making throws others wouldn’t attempt. Largely error-free ball, at least when the ball was leaving his hands.

Even though the Steelers began to stiffen up in the second half, and finally induced Watson into making a mistake, throwing an interception to Hilton early in the fourth quarter on third and long trying to make a play—knowing that they would be punting if they didn’t convert—it should still be concerning how the defense played against Watson in the first half.

Maybe they made some key adjustments in the second half to help clamp down, limiting the Texans to three three-and-outs among their four drives, but that doesn’t excuse the way that the secondary in particular played against a Texans offense that is still adjusting in the absence of DeAndre Hopkins.

What are they going to do when they have to face the Baltimore Ravens later this season? How many points will Lamar Jackson score in the first half before they’re able to tighten things up in the second—if they even manage to do that?

It’s nice that the offense has picked up the slack and has scored 80 points through the first three games, including nine touchdown drives, but I don’t think it’s unreasonable to have some reservations about the pass defense with respect to the team’s aspirations of being a Super Bowl contender.