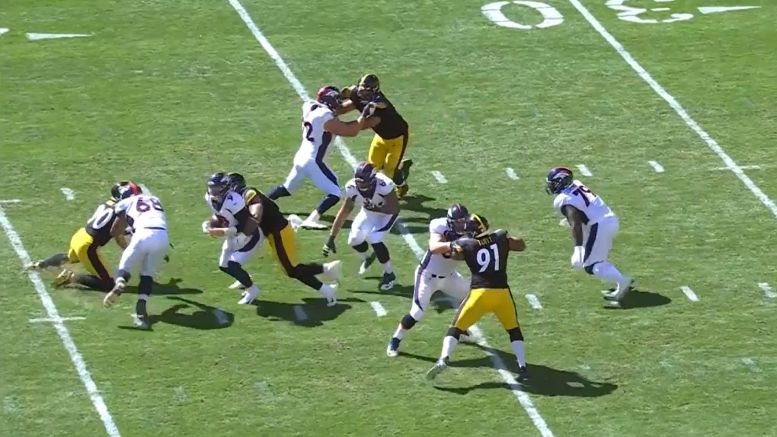 It may not surprise you to learn that Pro Football Focus including Pittsburgh Steelers outside linebacker T.J. Watt on their Team of the Week for the second straight week, after posting two and a half sacks against the Denver Broncos, and helping to set up a couple of others as well.

It may somewhat surprise you to learn that Tyson Alualu also made the team as one of the two interior defensive linemen, along with Shelby Harris, who happens to be with Denver, so both interior defenders on the Team of the Week came from one game, as well as three quarters of the front four.

Last week, the site wrote of Watt that we may be talking about Watt as the best edge defender in the NFL by the end of the season. It was more of the same this week, with Anthony Treash writing the following about the fourth-year linebacker:

Last week, T.J. Watt had a dominant showing against the Giants, producing a 93.7 PFF grade for the game and winning the PFF Week 1 Defensive MVP. This week, he had yet another incredible game by producing a 91.2 PFF grade and 38% pass-rush win rate, nearly 10 percentage points higher than any other edge rusher during Week 2. This was Watt’s 11th regular-season game since 2018 in which he posted a PFF grade north of 80.0. That’s the most at the position in that span by four (the Bosa brothers are tied for second with seven each). His speed rip gave Denver’s tackles fits all game. We’ve become accustomed to naming players like his brother, J.J. Watt, or Khalil Mack or Von Miller as the best edge rusher in the NFL, but I think T.J. is separating himself from the pack and becoming the best.

It’s actually remarkable how much Watt has been able to get into the backfield already, and is well on-pace to push for 90-plus pressures on the year if he can continue this trajectory—possibly even 100. As mentioned, his two and a half sacks are nice, but he has also been setting up plays, including sacks, for others, and he also has an interception.

Of course, he’s not doing it all by himself. The Steelers have arguably the best defensive front in the NFL, including Cameron Heyward, Bud Dupree, and Stephon Tuitt, all of whom have contributed to the Steelers’ 10 sacks so far through two games, the second-most in the NFL behind the Washington Football Team’s 11 (the next-closest has seven).

The Steelers have another home game coming up against the Houston Texans and Deshaun Watson, who has already taken a league-leading eight sacks so far this season, going down on more than 10 percent of his dropbacks. You can imagine the pass rushers will be chomping at the bit.