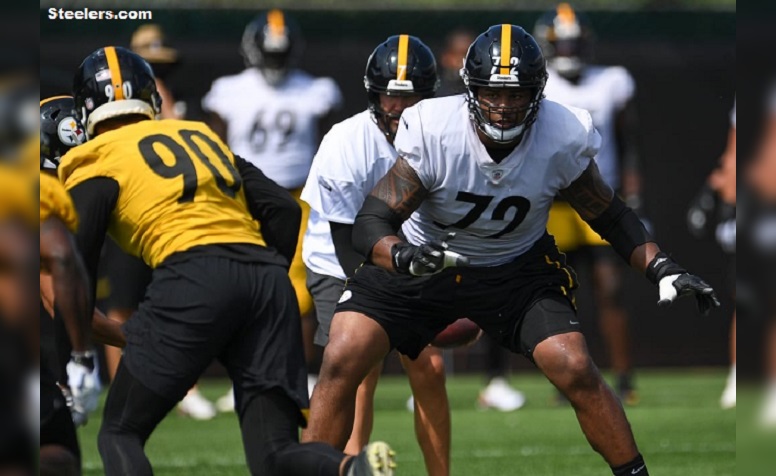 The Pittsburgh Steelers named Zach Banner as the team’s Week 1 starting right tackle this past week after he beat out Chukwuma Okorafor for the job during training camp. Part of that competition for that starting right tackle job included Banner and Okorafor both facing off quite a bit against outside linebacker T.J. Watt, who is now deemed one of the top pass rushers in the NFL. On Friday, Watt met the media and during his session he was asked to comment on Banner winning the starting right tackle spot for Week 1.

“Yeah, I enjoyed watching that battle going up against those two guys, him and Chuks [Okorafor] throughout camp,” Watt said on Friday. “And it was great for me because I got to go up against two totally different body types, two totally different [players] in how they attack as far as punching or not punching and foot speed and all that stuff. “I think that a Banner definitely earned the job as far as being able to come back in great physical shape. I know he took the offseason very seriously and it showed come fall camp.”

That’s quite a compliment for Banner, who will now make his first career NFL start at tackle Monday night against the New York Giants. In that start, Banner figures to go up against several different Giants defenders throughout the game and he gave a quick and dirty rundown of all of them on Thursday during his media session.

“No. 44 [Markus Golden], I mean, all these guys I’m going to name all have different things in their arsenal,” Banner said. “44 [Golden], 51 [Kyler Fackrell], 53 [Oshane Ximines] and there’s one more rush rush end. And then when you talk about the interior there, 97, Leonard [Williams], who I know really, really well. We’re the same age. SC, he left our true junior year. Amazing player, athletic, too, not only in the run game, but the pass game. 94 I know really well, too. Dalvin [Tomlinson]. Played at Alabama. Same age. He’s strong, hard to move. The same thing with 97 [Williams].”

Most of Banner’s Monday night playing time figures to be against edge rushers Markus Golden, Kyler Fackrell and Oshane Ximines as Leonard Williams and mostly line up inside over the guards. While none of those three edge rushers are deemed as good as Watt, Golden did register 10 sacks last season and has 29 for his career. As for Fackrell, he’ll enter the Monday night game against the Steelers with 16.5 career sacks with 10 of those coming in 2018 as a member of the Green Bay Packers. Ximines, on the other, had 4.5 sacks for the Giants last season as a rookie.

It will be a good first test for Banner right out of the chute and it will be interesting to see if he’s able to pass it with flying colors. Going against Watt the last few training camps is certainly a great way to test your mettle as a tackle. When it comes to iron sharpening iron, Watt’s some of the best iron the NFL has as far as edge rushers go and Banner might not face a player of his caliber all season.