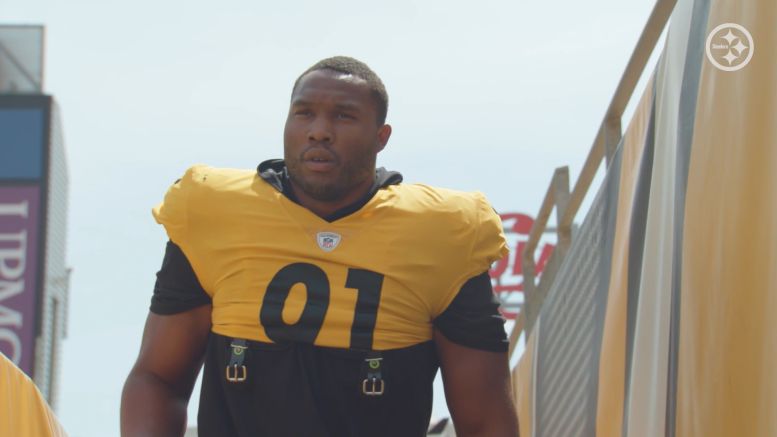 Stephon Tuitt is a key part of the Pittsburgh Steelers defense. They spent most of last season without him, after he had gotten off to the best start of his career in the first five games, looking as though he could legitimately push to make the Pro Bowl for the first time.

Now entering his seventh season, he not only has to rediscover his previous form, he has to overcome the hurdle of healing from a torn pectoral muscle. But fortunately for him, however, Cameron Heyward went through the same injury at the same point in his career and missed about the same amount of time. And you can bet that was a resource for Tuitt.

“I got a chance to witness his injury”, he told Missi Matthews about how his teammate’s experience was an asset in going through his own trial. “I got a chance to see him go through the process. Being able to see him go through the process, see what the doctors did with him, see what he did in the offseason when I trained with him, I was able to just correlate that back to myself and remember all those things and put it forth for this season”.

Heyward suffered a series of injuries during the 2016 season, his sixth, that culminated in a torn pectoral muscle. Since then, he has found a new gear and has reached new heights in his career, making the Pro Bowl in all three seasons and with two first-team All-Pro distinctions as well.

Of course, Tuitt isn’t in the position to focus on that at the moment. Right now, he just wants to get back on the field and start getting back to normal. He’s tackled some of his teammates with that surgically-repaired muscle, but now it’s time to test it in-game.

“The process was hard. Any big-time injury is a lot to come back from, and I had a big one”, he said. “Just to be able to have my teammates speak about me the way they have done in the media and to get a chance to read that was motivation for me to continue to go and to not have my head down but to pick it up and come back more than ready. That’s the example of team and teammates; this is a family unit”.

That was likely harder to accomplish this offseason because of the pandemic. Not only were players unable to work out at the team facility together, it was more difficult to get together on their own as well, although they did manage to find some time.

The band is back together now, however, and looking in top form. The Giants do have some quality interior offensive linemen such as Kevin Zeitler and Will Hernandez, so the assignment can’t be taken lightly. It should serve as a good reintroduction for Tuitt as he looks to get his feet back under him.