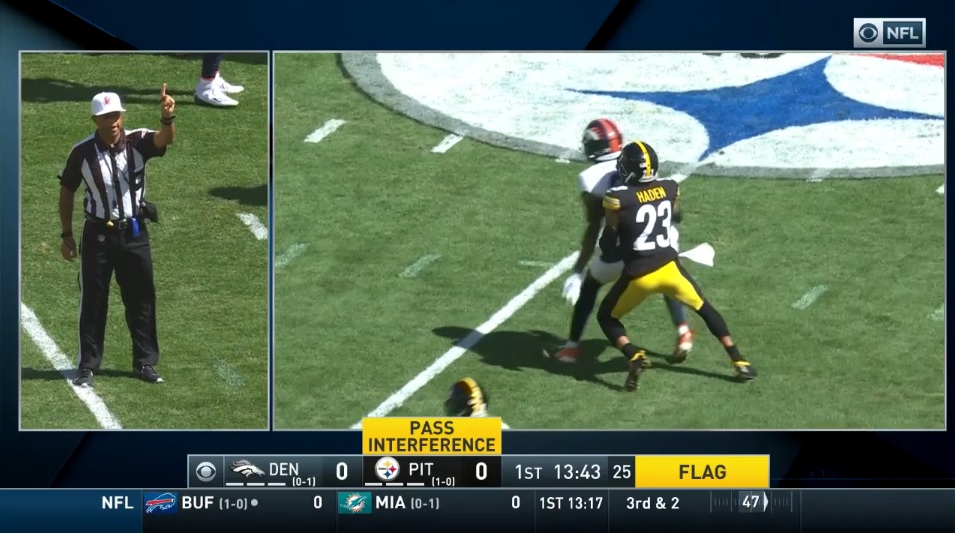 Yellow flags were one of the driving reasons why the Pittsburgh Steelers let the Denver Broncos hang around Sunday afternoon. The Steelers walked away with the victory but left Heinz Field with ten penalty flags. That included several backbreakers. Multiple pass interference/holding calls that kept Denver drives alive and a block in the back that negated an 81 yard Diontae Johnson punt return.

To work on those mistakes, Mike Tomlin said the team will bring in officials during this week of practice.

“We’re not only analyzing and openly talking about the penalties, we’re working hard to rectify it,” Tomlin told reporters during his Tuesday press conference. “We intend to bring some officials to our practice work this week in an effort to make a point and emphasis on that area. That’s important for us. I thought that was a catalyst for a lot of negativity in that game for us.”

The Steelers defense was called for six penalties in the win. Four of them were pass interference or holding. One on Joe Haden, Minkah Fitzpatrick, Terrell Edmunds, and Devin Bush. Fitzpatrick was called for a second penalty, a horse collar tackle while Mike Hilton was flagged for launching into Jeff Driskel, turning a would-be 3rd and 10 into a fresh set of downs. Noah Fant found the end zone the next play. The only silver lining to the Cam Sutton’s penalty that called back Johnson’s punt return touchdown was Chase Claypool’s 84 yard touchdown the following play.

With training camp moved and the pandemic limiting personnel, the Steelers didn’t have refs during the summer like they annually do. And of course, there was no preseason to get a feel for any shifts or tweaks in the way officials intended to call games this season. Tomlin’s not using that as an excuse but hopes the team can get permission from the league to bring refs in during the week.

“We’re going through the logistical procedures today to secure some officiating for practice,” Tomlin said. “We’ve been in communication with the league office to make sure we’re adhering to all the protocols and doing whatever is necessary to make sure that we’re in compliance and make sure everyone is safe. But the bottom line is we need to ratchet up our quality of play in that area.”

Pittsburgh’s 13 penalties through two games ties them for 14th most in football. As their schedule gets tougher beginning with Sunday’s tilt against Houston, it’ll be hard to win games with double-digit penalties, especially the costly ones the Steelers made against Denver.