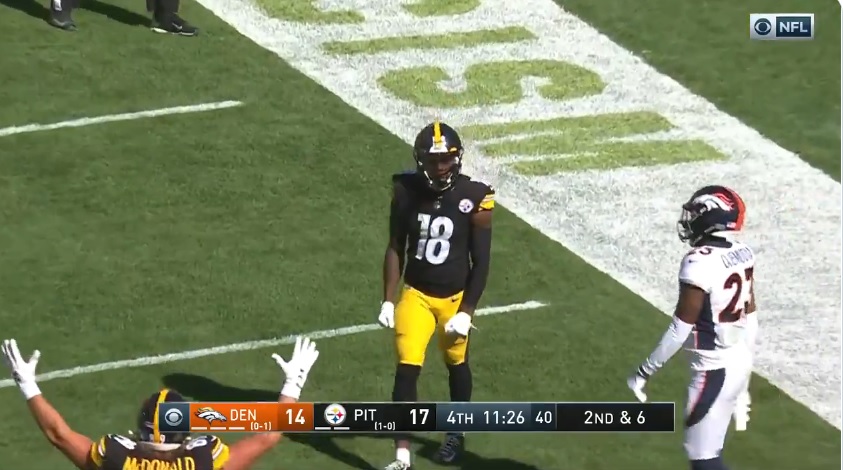 The Pittsburgh Steelers knocked Drew Lock out of the game early and used a timely fourth quarter sack to hold off a pesky Denver Broncos team, 26-21.

On the second drive of the game, after both teams punted the ball away on their first possessions, Bud Dupree sacked Lock, forced a fumble, and the ball was recovered by Mike Hilton. It gave the Steelers the ball near midfield, and effectively knocked Lock out of the game with a right shoulder injury.

The fumble recovery would lead to a nine play, 59 yard drive capped off by a James Conner two yard touchdown to put the black and yellow up 7-0. Ben Roethlisberger completed four of seven passes to three different receivers on that drive.

After punts from both teams, the Broncos would move the ball into field position led by backup quarterback Jeff Driskel, capping off their five play drive with a Brandon McManus 48 yard-field goal to cut the Steelers lead to 7-3.

Both teams would exchange punts again, when the Steelers would take over with six minutes left in the half. Big Ben would connect with rookie Chase Claypool for an 84 yard touchdown to put the Steelers up 14-3. The touchdown marked the first of Claypool’s career, and Roethlisberger’s 357th in his career.

The Broncos would again move the ball into field goal range on their ensuing possession, starting the drive off with a 45 yard completion from Driskel to Courtland Sutton. However, the Broncos would miss a 58 yard attempt to leave the score at 14-3.

Late in the second quarter, the Steelers would get another turnover. Driskel’s pass deflected off of Sutton’s hands and into the arms of Joe Haden. It would lead to a Chris Boswell 21-yard chip shot to put the Steelers up 17-3 at halftime.

The second half offensively for the Steelers started off sloppy. After an explosive 49 yard kickoff return to start the third quarter, Big Ben’s pass intended for JuJu Smith-Schuster would be intercepted by Justin Simmons and brought back into Steeler territory. Two third down conversions later, the Broncos had first and goal at the Steelers four yard line, but the Steel curtain defense held strong and forced another McManus field goal. The Broncos would convert a 28 yard field goal to pull within 11 points.

The Steelers saw their nine play drive end with an incompletion from Roethlisberger to Ebron on fourth and two. The Broncos would capitalize, helped by two Steelers defensive penalties (roughing the passer and defensive pass interference). Driskel would find Noah Fant for a 20 yard touchdown, and find him again on the two point conversion to cut the Steelers lead to 17-14 late in the third quarter.

However, on the next drive, we would see vintage Big Ben on full display. After throwing an interception early in the third quarter, he would complete 14 of his next 15 passes, including big gainers to Eric Ebron for 21 yards, and connecting with Dionate Johnson for a 28 yard touchdown after scrambling out to the right. That score would put the black and yellow up 24-14.

After forcing a three and out, Broncos punter Sam Martin would bobble the snap in his own end zone and get tackled for a safety, extending the Steeler lead to 26-14.

A Benny Snell fumble would set up another Broncos touchdown. Jeff Driskel finds Melvin Gordon on a wheel route for a 16 yard touchdown, cutting the Steelers lead to 26-21 with just under six minutes in the fourth.

After the Steelers go three and out, the Broncos would have one last chance to take a late fourth quarter lead. After an 11 play, 56 yard drive that would span over four minutes, Steelers safety Terrell Edmunds would come up with a huge sack on a fourth and two to stop the Broncos in the red zone. James Conner would end the game with a big 59 yard run, to help the Steelers hold on for the win, 26-21.

The Steelers would finish with seven sacks defensively, led by TJ Watt, who recorded two and a half. Big Ben finished the game completing 29 of 41 passes for 311 yards, two touchdowns and one interception. The Broncos Jeff Driskel played well in relief of Drew Lock, going 18/34, 256 yards, and also tossing two touchdowns.

The Steelers will play at Heinz Field again next week, hosting the Houston Texans who are playing the Ravens this afternoon. Kickoff is set for Sunday at 1 PM/ET.