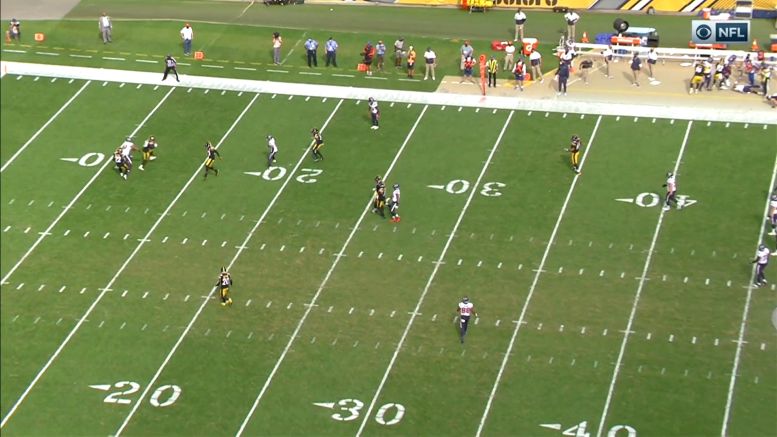 For the first time in quite a while, the Pittsburgh Steelers played a game in which there was just a single turnover. They turned the ball over in 25 consecutive games themselves, but they also recorded a takeaway in nearly every game last season, so to have the ball change hands just once on a splash play has been exceedingly rare, and that included the first two games of the season.

But there was just one today, and the Steelers were on the ‘receiving’ end of this one, when Mike Hilton recorded his first interception of the seasons and fifth his career, jumping in front of Deshaun Watson’s intended receiver to end the Houston Texans’ only promising drive of the second half.

Houston only had four total possessions after halftime, and three lasted just three plays, none gaining more than six yards. Their one promising drive lasted eight plays and spanned more than 40 yards, but came to an unceremonious end when Watson looked for Kenny Stills.

Hilton was playing deep, and Watson didn’t see him, thinking that Stills had his man beat. It was on third and 15, and he was scrambling, in the hopes of working his way into field goal territory, when he thought he saw his man flash open—only he wasn’t, and it was by far his biggest mistake of the day.

Even though they may have ended up punting anyway, the turnover provided energy for the offense, which capitalized with the go-ahead touchdown. “Oh yeah, for sure”, it provided a spark, JuJu Smith-Schuster said after the game. “I definitely thought it on that one. I said we needed a big stop, a big pick, and that’s what happened. He got an interception and we were able to turn the ball over and make plays”.

T.J. Watt, who had been getting after Watson as a pass rusher all game, was also grateful for that splash play, especially given the less than great first half the defense had as a unit, allowing the Texans three touchdown drives.

“I think more than anything, we just want to be able to be the spark”, he said. “We knew coming out of halftime that the energy was very down, and we thought as a defense we should be the ones to pick the pace up. We knew the offense was playing well in the first half. Any time you can get a turnover on defense, you’re in good shape, and it usually brings the energy”.

Ben Roethlisberger and company proceeded to rattle off a 12-play, 79-yard, seven-minute drive, capped off by a two-point conversion to give them a seven-point lead, for their third offensive touchdown of the day, and the one that would prove to be the difference-maker. And it started with a takeaway, the Steelers’ fifth of the year.