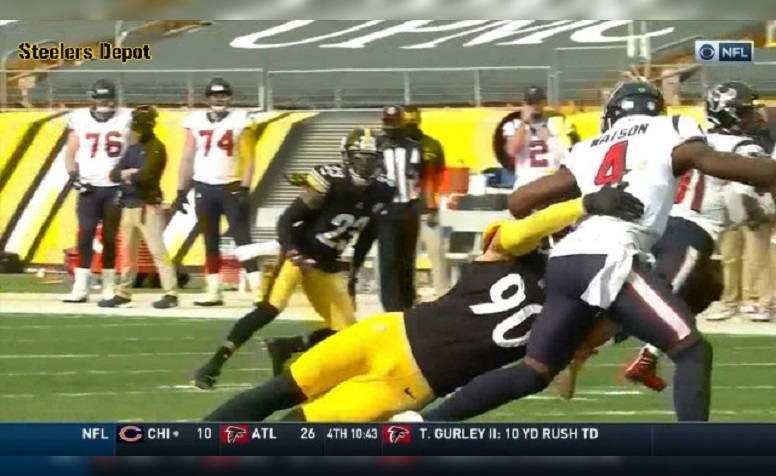 Pittsburgh Steelers outside linebacker T.J. Watt had another strong game on Sunday in the team’s Week 3 home win against the Houston Texans as the former first-round draft pick out of Wisconsin registered 4 total tackles, a sack, 4 quarterback hits and 2 tackles for loss. Watt’s sack of Texans quarterback Deshaun Watson came on the first play of what turned out to be Houston’s final possession of the game and resulted in a loss of 11 yards. After the game, Watt talked about that sack and what the Texans offense attempted to do throughout the game to keep him away from Watson.

“Yeah, I think they did a good job all day of protecting him [Watson] and using a multitude of chips and backs and tight ends and receivers in kind of funky splits, so it was kind of affecting the way that I rush the passer,” Watt said during his postgame media session. “And then funny enough at the end, they just chipped a little bit too hard and the tackle overset and came underneath, and I was able to make a play.”

You can see the sack in question below and how Texans tight end Darren Fells attempted to chip inside on Watt at the snap of the football and he essentially pushed the Steelers outside linebacker right into an open gap. Additionally, on the play, Texans right tackle Tytus Howard overset to the outside and probably because he was thinking Watt was going to go up the field on the 1st and 10 play. Had Fells not touched Watt at all, you must wonder if Watt would have been able to sack Watson on the play.

Sacks are sacks and thus degree of difficulty doesn’t matter. That said, that sack that Watt had on Sunday might just be the easiest one of his young career. It came at a great time as well as the Texans couldn’t recover from it and only ran two more offensive plays before punting away the football to the Steelers for the final time in the game.

Watt has now registered at least half a sack in 15 of the Steelers last 16 home games, including each of the last 12 games. His 18 sacks since the start of the 2019 season are the third most in the NFL since then. Additionally, Watt’s 46 total quarterback hits are the most in the NFL since 2019. He currently leads the league with 3.5 sacks entering the Week 3 Monday Night Football game.